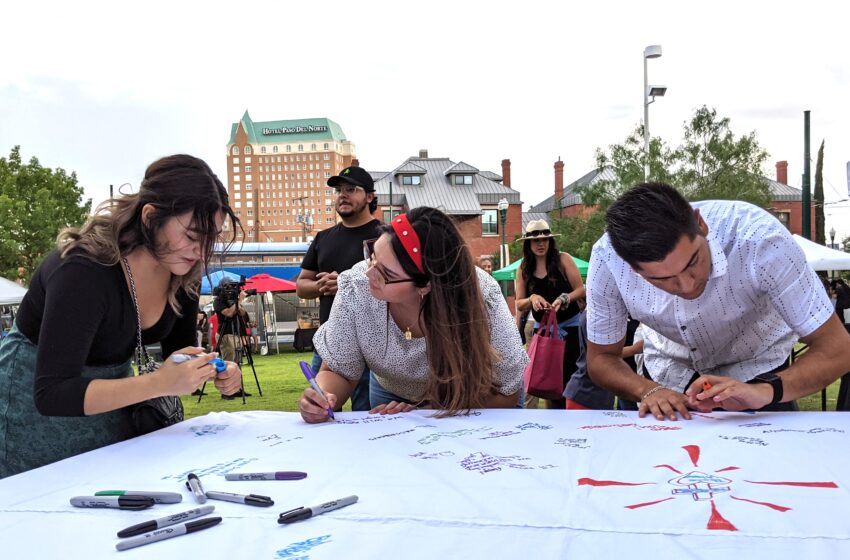 In conjunction with the opening of the El Paso County Healing Garden on August 3rd and under the support of the Office of El Paso County Judge Ricardo Samaniego, a group of volunteers created the “In Remembrance/En Recuerdo,” a fabric mural for the families affected by the August 3rd Walmart shooting.

Ramona Juárez and other volunteers created the 6.5-feet-by-70-foot muslin mural, which is dedicated to the families affected by August 3rd Walmart shooting.

On Monday, August 2nd , the mural will be installed across the street from the Healing Garden at Ascarate Park (located at 6900 Delta Drive – near the entrance to the park) and will remain on display for several weeks.

Juárez, who came up with the idea, said she wanted to “remind the families whose lives were affected by the senseless act that they are not alone.”

It took five days for the seven volunteers to create the muslin mural which was donated by a national fabric store. Volunteers took twelve hours to cut, sew, hem and gromet the seven individual 6.5-feet high by 10-foot wide muslin sections which is expected to take several hours to hang, even with assistance from the El Paso County Parks and Recreation staff.

The mural will also offer a space for members of the community to write messages to the families who were affected by the August 3, 2019 tragedy.

On Thursday, July 29th one section of the fabric mural was signed at the Farmer’s and Art Market in Cleveland Square held in front of the El Paso Museum of History; on Friday, July 30th two sections were signed at the Ysleta Independent School District Central Office

On Saturday, July 31st the public is invited to sign from 12-2 p.m. (or until all fabric sections are signed) three sections, inside Bassett Place, 6101 Gateway Boulevard West, at the entrance to the Premiere Cinemas, next to FYE Record Store.

Everyone is welcomed to come sign the fabric panels, as the event is free and open to the public.

Contributors to the project include the Val Verde Neighborhood Association members and residents Linda and Anastacio “Tacho” Zavala.

We would like to thank Judge Ricardo Samaniego and his staff, including El Paso County Parks and Recreation staff members: Veronica Myers and Tessa R. Jimenez and their staff; Erica Marin, Curator at the El Paso History Museum and Lucero A. Duran, MCAD Farmer’s Market Coordinator and their staffs; Monica Bustillos, Director, Y.I.S.D., District Marketing and Communication and her staff; and Alejandra Contreras, General Manager, Bassett Place and her staff.

For more information on the project, contact Dr. Juárez at: migueljuarez.soha@gmail.com

What: Signing “In Remembrance / En Recuerdo,” Fabric Mural to be installed at Ascarate Park in conjunction with the Healing Garden.
When: 12 noon to 2 p.m.
Where: Inside Bassett Place, 6101 Gateway Blvd. West, Enter at Bassett Premiere Cinemas entrance, next to FYE.
Why: You are invited to sign in support of the families affected by the August 3, 2019 shooting to remind them that they are not alone.

Who should prosecute the El Paso Walmart...