Washington, D.C. – On Thursday, Congresswoman Veronica Escobar, Vice Chair of the House Armed Services Subcommittee on Military Personnel, co-led the reintroduction of the I am Vanessa Guillén Act in honor of the late Spc. Vanessa Guillén and the many survivors of military sexual violence who have bravely come forward in the wake of her disappearance and brutal murder.

Spc. Guillén’s brutal murder became the catalyst for long overdue change when her family refused to let her case be neglected by Army leadership at Fort Hood. This month, the Army’s internal investigation found that Spc. Guillén was sexually harassed by her platoon sergeant and that her command was aware of the allegation but did nothing. Last year’s Independent Review Committee report found that the Army’s sexual assault and sexual harassment prevention and response programs had failed at Fort Hood, and the I am Vanessa Guillén Act incorporates recommendations from the independent review.

“More than one year ago, the unspeakable tragedy of Spc. Vanessa Guillén’s murder shocked our nation and shed new light on the epidemic of unchecked harassment, assault, and retaliation throughout our armed forces,” Congresswoman Escobar said. “Vanessa’s memory sparked a movement for justice and accountability that I am honored to carry forth through the I Am Vanessa Guillén Act. I look forward to working with my colleagues, Chair Speier, Secretary Austin, and the Biden administration to advance this bipartisan legislation and put an end to this toxic culture in the armed forces and protect those who bravely put their lives on the line for our country.”

“As a father, veteran, and Texan, the murder of Vanessa Guillén hit close to home,” said Congressman Tony Gonzales. “The handling of this sexual assault case is not unique to the Army and there needs to be significant improvement to the way the sexual assault harassment and assault claims are handled throughout the Armed Forces.”

“One year after the senseless murder of SPC Vanessa Guillén, and after two damning reviews, the need for fundamental reform of the military’s approach to sexual assault and sexual harassment has never been more urgent. Military leadership has had decades to solve this problem, yet continues to fail. Toxic command climates, rampant sexual violence, lack of accountability, and retaliation against survivors continue to worsen,” Chair Speier said. “Congress must enact these reforms this year to achieve justice for Vanessa Guillén and all survivors of sexual violence. We must send a message to all servicemembers about the nation’s expectations for their conduct and the culture of the military. Congress must pass the I am Vanessa Guillén Act this year.”

“The issue of sexual assault and sexual harassment in the military isn’t a Democrat or Republican issue – it’s an American issue. We must strengthen the military’s ability to protect its most important resource, which is the people who willingly sign-up to protect all Americans,” Congressman Mullin said. “The I am Vanessa Guillén Act will also encourage survivors to come forward to report sexual assaults and sexual harassment and to provide justice. This is about protecting our men and women in uniform and I will keep fighting so no family has to go through what the Guillén family has gone through.”

“With the reintroduction of the I am Vanessa Guillén Act, we want to make sure that transformative and comprehensive reform happens for how the military treats victims of sexual assault within their ranks,” Congresswoman Garcia said. “This is a step in getting justice for Vanessa. And progress has been made but we need to do more. Vanessa Guillén, a daughter of immigrants who wanted to serve her country, has forced the most powerful military in the world to change and be better. I want the Guillén family to know that we stand with you and will continue fighting until the bill becomes a law.

“Our military servicemembers risk their lives for our nation, and in return, it’s our country’s obligation to ensure their safety,” Congressman Balderson said. “I am proud to once again support this legislation, which takes important steps to ensure survivors of sexual assault and sexual harassment in our military can tell their stories without fear of retribution as they seek the justice they deserve.”

“In basic training I was taught everything from marksmanship to the chain of command, but preventing sexual assault was not a priority,” Congressman Jason Crow said. “The military failed Vanessa Guillén and we will continue to fail our service members until we create a system and culture of accountability. It is Congress’ role to decide what sort of military our nation will have and we must pass the I am Vanessa Guillén Act to protect our women and men in uniform.”

Specifically, the I am Vanessa Guillén Act would: 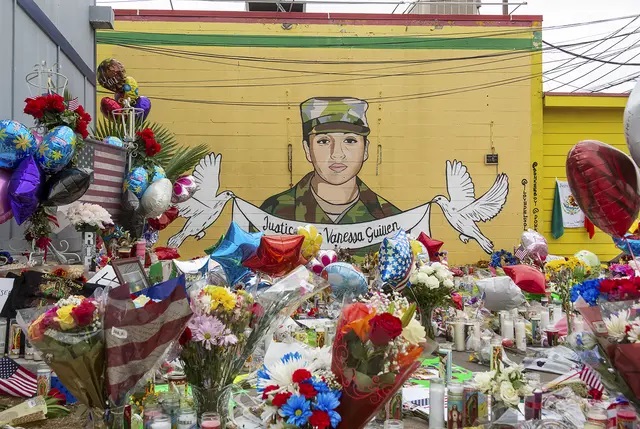