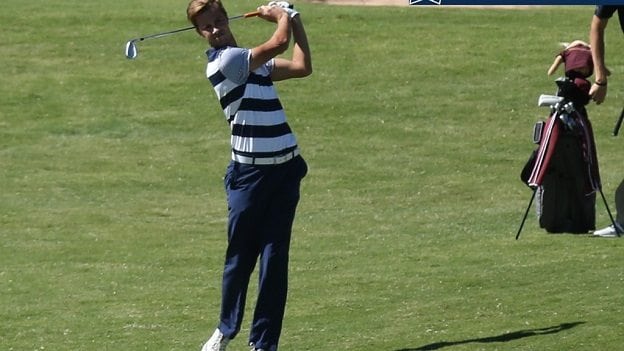 STOCKTON, Ca. – UTEP men’s golf senior Charles Corner picked up four birdies to help him to a round of 69 and a tie for eighth place after one round of the NCAA Pacific Regional at The Reserve at Spanos Park (par 72/ 7,239 yards) on Monday.

Corner, playing as an individual, is two strokes out of the lead and ranks third out of 75 among the individual competition. The top individual not on an advancing team will move on to the national championship May 25-30 at Karsten Creek Golf Club in Stillwater, Oklahoma.

Iowa State is leading the field as a team with 10-under 278, while a three-way tie between Daniel Sutton (Kansas), Brandon Wu (Stanford), and individual Ryan Han pace the field with 5-under 67.

The recent UTEP graduate and lone Miner representative shot three birdies on the front nine, including consecutive birdies on holes No. 5 and No. 6, and only bogeyed once in his opening day run. He is tied for second in both Par 3 scoring (3.00 avg./E Sc.) and Par 4 scoring (3.80 Avg./-2 Sc.) while also ranking in a tie for fourth in the field in birdies with four and second on the leaderboard in pars with 13.

The NCAA Pacific Regional will continue tomorrow and run through Wednesday, with the low five teams and the low individual not on those teams from each regional punching their ticket to the finals.

Live stats are available at golfstat.com