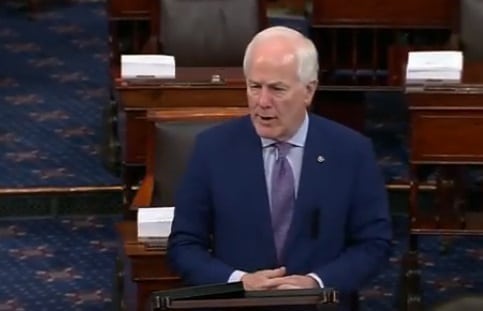 WASHINGTON – Monday on the floor, U.S. Senator John Cornyn (R-TX) discussed his recent trip to the Texas-Mexico border and the Keep Families Together and Enforce the Law Act, legislation to ensure immigrant families can stay together while they await their court proceedings.

Excerpts of Sen. Cornyn’s floor remarks are below, and video can be found above.

“I traveled there to tour two facilities in Brownsville, along with Senator Cruz, that housed young children, some very young, some up to 18, just under 18 years of age, that are being sheltered after their parents crossed illegally into the United States.”

“After touring these facilities in Brownsville and meeting with various federal agency officials and nongovernmental organizations and local elected officials at the Weslaco border patrol station, what we learned is the situation is far more complex than meets the eye and that many of the narratives that have been spun about what’s happening at the border are just simply false.”

“Treating families with compassion by allowing them to remain together and enforcing our immigration laws don’t have to be mutually exclusive. And our bill will ensure that they aren’t. It will allow children to stay with their parents in a safe facility while they await their court proceedings to see if they perhaps are eligible for some sort of immigration benefit like asylum.”

“Our bill would also set mandatory standards for care in family residential centers where immigrant families are placed and keep children safe by requiring they are removed from the care of any individual that presents a danger to them.”

“What happens now that kids have been placed apart from their parents? Our bill requires the administration to take steps to reunify as many families as possible.”

“Some have falsely claimed that our bill promotes indefinite detention of families. But that’s certainly not the intention. Our bill does not mandate the Department of Homeland Security detain parents and their kids indefinitely.”

“On this issue, I think her bill has a number of problems. In fact, there’s a huge question of what sort of enforcement, if any, would be permitted under her bill. In effect, this bill would make it impossible to criminally prosecute parents for crossing the border illegally unless their child is able to go into Department of Justice custody with the parents. This bill doesn’t even specify where the families should be held.”

“That’s a big problem, Mr. President, because children shouldn’t go to jails and prisons run by the Department of Justice with hardened, potentially violent criminals… That’s why essentially the bill advocates for catch and release.”

“Both our bills allow for families to be kept together while they are waiting for court proceedings, but only one of them, the Tillis bill, also permits enforcement of our laws.  That seems to be the choice that our Democratic colleagues have made.”

“If we come together, we can resolve the situation swiftly and ensure these children are kept with their families.”