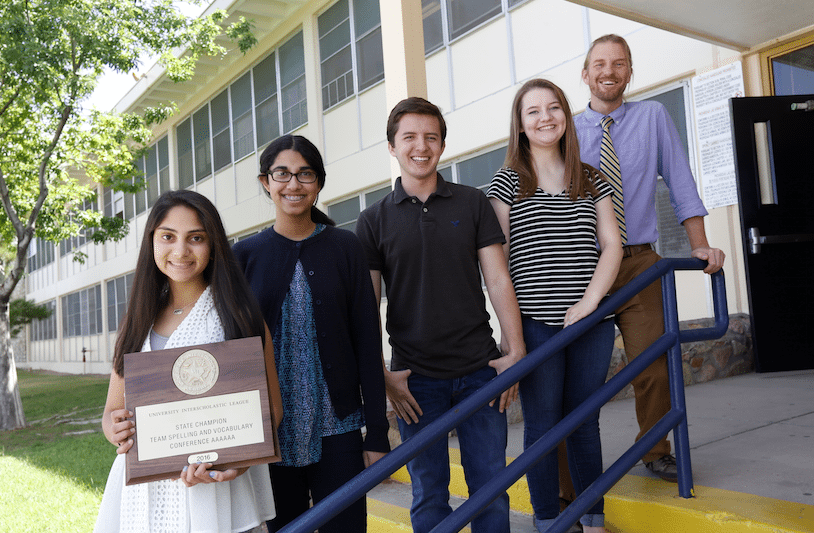 Four T-Birds are soaring a little higher after winning the state 6A UIL Spelling and Vocabulary competition – a first for any El Paso high school.

“The competition at state is really difficult,” Coach Brain Keen said. “This is only the second time we have sent a team from Coronado to compete at state, and they did really, really well. It’s amazing.”

The team is made up of seniors Abigail Spitzer and Luke Minton, as well as freshmen students Sonali Patel and Kareena Shokar. The Coronado team placed first after tallying the top three individual scores on the team. Spitzer and Shokar placed second and sixth, respectively.

“The competition was very difficult. It taught me about hard work and determination,” Shokar said.

The former Hornedo Middle School student is thankful for the teachers that have helped her along the way.

“I feel the teacher foundation is strong,” Shokar said. “I have always been encouraged to try my hardest and that fueled my want to study.”

The UIL competition is comprised of three different parts, which include a proofreading section, hand-written spelling of 70 words pronounced aloud to contestants and a final tiebreaker section of 20 additional pronounced words.

To prepare, students study a “Word Power” list of 1,500 words that changes every year. The Coronado team has been practicing together once a week, as well as individually, since January. They study not only the UIL list, but also other spelling lists available online to fine-tune their skills.

Spitzer, who has competed in the UIL competition all four years of high school, made it to state her freshman year. Making it to state is not an easy feat, and she was ecstatic to make it back to state her senior year.

“I was really excited. I thought it was a great honor to be able to do so well my senior year and placing high,” Spitzer said.

Being part of the competition throughout her high-school career has helped her improve in other classes, not just English.

“One of the more valuable things you learn is how it helps out in science,” Spitzer said. “Spelling requires you learn a lot of Latin and Greek words, which come up a lot in biology and physics.”

Minton has also competed all four years and is happy to end the year strong. He credits the competition with helping improve his studying habits and overall academic standing.

“It’s definitely taught me to study a lot of material in a short amount of time and maximize the efficiency of my schedule,” Minton said. “UIL is a good opportunity for high-school students to explore their academic interests. It’s been a beneficial part of my high-school experience.”