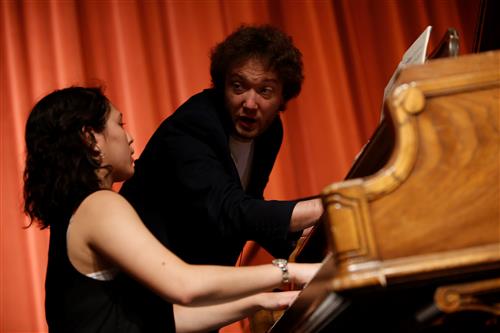 Every day, outstanding music teachers provide high-level instruction to the thousands of students who have opted to incorporate music into their education plan.

On Tuesday, however, a handful of advanced music students got a once-in-a-lifetime educational opportunity: a one-on-one lesson from world-renown classical pianist Dzmitry Ulasiuk.

Ulasiuk, a native of Belarus who is trained in the Russian technique, imparted the master classes at Coronado as part of his visit to El Paso, which include private and public concerts throughout this week.

On Tuesday, he listened to students play Chopin pieces at the Coronado Capshaw Auditorium. After studying their performances he provided a personal master class aimed at helping them improve their skills at the piano.

“I’m here because I want to share my experience and my knowledge of music,” Ulasiuk said. “The students did a really, really good job. I am very glad to have been able to work with them.”

Ulasiuk appreciated the pieces the students chosse because the music from the Polish composer allows him to better understand the pianistic techniques the students know and use.

Part of his lesson to the students on Tuesday centered on their responsibility to the audience as a musician and performer.

“Play differently so they can hear differently. They need your help to show them the important parts,” he said. “When you play it

influences people because they hear how music is actually formed right in the place where they are sitting. It’s not just a score. It’s actually a presence – a sort of magic.”

The pianist started playing professionally around the same age as the Coronado students. A point he used to stress that it is never too late to start playing if they are dedicated and willing to put in the practice.

“Spend all the free time you have practicing. It’s important to experience another approach, instead of studying with one teacher,” Ulasiuk said. “I think it’s important to play for different people and hear different aspects about music.”

Junior Isabella Ortega performed one of Chopin’s latter pieces, a nocturne with a wistful melody.

“It’s a really romantic piece. A lot of his advice was stylistic things I need to do because Chopin is different than the style I’m used to,” Ortega said. “This is the first time I have done a master class, so I was pretty nervous, but it is a good experience. It helped me out a lot.”

Ulasiuk covered everything from technique to performance tips.

“He gave really good tips for when you get nervous, stylistically feeling the keys and knowing you have to work on your body first before you work on your hands,” Ortega said. “That’s not something I ever really realized, but I will work on incorporating that now.”

Ulasiuk showed off his skills, playing Ravel’s “Ondine” and the “Nocturne for the Left Hand” by Aleksandr Scriabin, among others. Students were enthralled by his playing, which shifted from the serene to a jaw-clenching fervor of notes.

“It was incredible seeing the way he is able to connect his scale passages. It was really nice to see his fast passages, especially when he played his left hand piece,” Ortega said. “The voicing in the notes was amazing to watch.”

Teacher Clay Vandertulip hopes the students will take to heart what they learned on Tuesday.

“We don’t get professionals coming to the high school level very often,” he said. “When I was approached with this opportunity I jumped on it because the students need to hear about what is possible with practice and dedication. I looked at it as an opportunity for the kiddos to not only learn but to take in some fine professional music.”