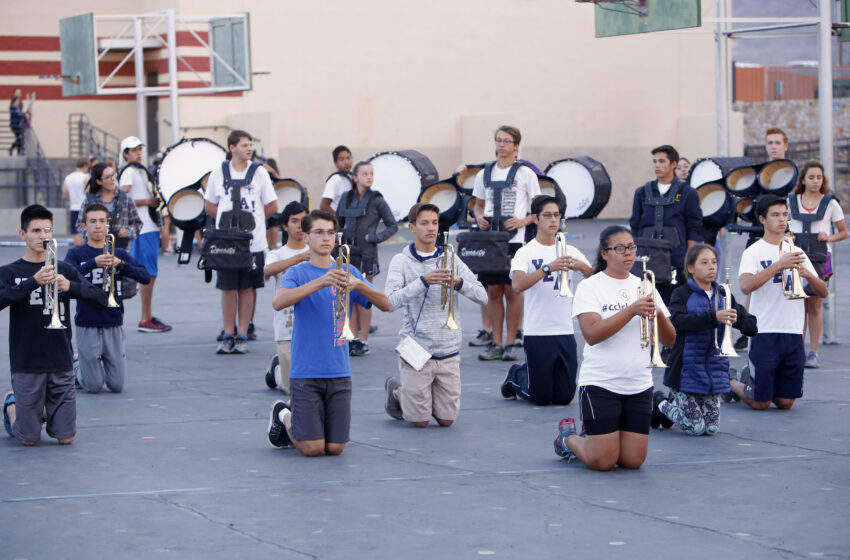 Just before dawn, the powerful sounds of brass and woodwinds fill the air surrounding Franklin and Coronado high schools as their respective marching bands fine tune their routines for state competition next week.

Coronado placed second and Franklin third at the UIL area competition last week to advance to the UIL state competition in the San Antonio Alamodome next week.

“We are just extremely proud of the whole band for giving it their all, especially during that final performance,” senior and drum major Shania Cordova said. “Everyone here is so hardworking. The band is just fantastic.”

While it is Coronado’s 10th trip to the state competition, the students are proud to be representing El Paso alongside their neighboring high school.

“We don’t really have a rivalry. All the marching bands, we connect with each other,” Coronado senior Natasha Marcum said. “At every game, we make sure we introduce ourselves.”

It is the drum major’s second trip to state. Coronado earned a spot in the state competition two years ago when Marcum was a sophomore.

“We are just planning on going out there and like Mr. Saenz always says ‘we are going to play our game and do our best,'” she said.

Drum major Victoria Vasquez, who also marched at state as a sophomore, believes this year’s band is even stronger and more ready for state competition than before.

“I think we are a lot more prepared than we were two years ago. Our music is a lot better and our marching has gotten a lot better,” Vasquez said. “We pick out new shows every year and I believe this year it’s a more professional show for that specific contest. This band loves to compete and this is what our final goal was for the season. We are just happy to go.”

The Franklin band, inspired by their band directors Bruce Beach and Daniel Allen, even created a mantra last year dedicated to them.

“We have a saying since last year, ‘take Beach to state,'” senior Genesis Luevanos said. “It feels great to be able to finally do this for Mr. Beach and Mr. Allen.”

Beach, however, gives all the credit to his students for their commitment to success.

“This is quite a momentous occasion,” Beach said. “I am very proud of them. They’ve worked really hard this year. It has nothing to do with me. It’s all about them. We are blessed.”