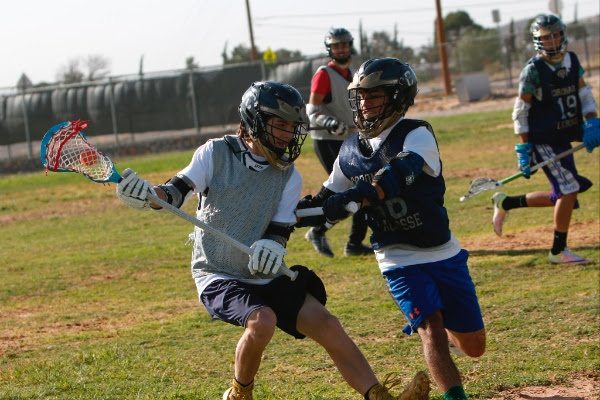 EPISD students are gearing up to play lacrosse as part of the Coronado Lacrosse club, the only El Paso high school team to compete locally in the sport.

As a club, the team is not a UIL-sanctioned sport so students compete only against other clubs and teams in the New Mexico High School Lacrosse Association. Coronado Lacrosse is currently sixth in the league, qualifying for the playoffs in Albuquerque later this month.

Head coach Robert Aguinaga, who volunteers his own time to coach the students afterschool, is proud of all the team has accomplished.

“Lacrosse is a great sport. It has the physicality of football and hockey and endurance of soccer. We are a varsity level team competing against the New Mexico teams,” Aguinaga said. “The students are doing great.”

The team was formed in the fall of 2014 thanks to some student initiative.

“My cousin let me play with his old equipment because he played in high school, and it just really sparked my interest to play lacrosse,” Gomez said.

When he returned he looked for lacrosse teams in the El Paso area he could play with but had no luck.

“I took it upon myself to make a team here in Coronado,” Gomez said.

He started recruiting his friends and other students to form a 14-person team the first year. The team has kept growing, and now has 18 players, including two teammates from El Paso High School.

El Paso High sophomore Ethan Graham has a personal connection to the sport – his parents attended the naval academy where lacrosse is big on campus.

“It’s great being part of this team,” Graham said. “I am proud of all the guys who have put in a lot of effort and hard work to make it to the playoffs in the second year. Hopefully we make it past the first round and generate a lot of interest.”

Coach Aguinaga also hopes to create interest and expand the team after receiving a grant from U.S. Lacrosse, the national governing body

of men’s and women’s lacrosse.

“We will be able to take advantage of the equipment next season and hopefully open it up to a lot of players, especially students who wanted to play but maybe couldn’t because of financial reasons,” Aguinaga said.

For Gomez, anything to create excitement about the sport he loves is great.

“It’s an amazing thing to see how far the team has come in such a short amount of time,” Gomez said. “It’s one thing to have a dream and to see it come true is one of the most gratifying feelings ever.”