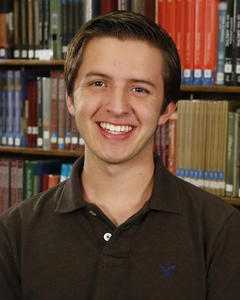 Luke Minton’s tour de force performance in the 25 Advanced Placement exams he has taken during his time at Coronado High School have earned the senior the rare Texas AP Scholar Award for the 2015-16 school year.

Minton, a senior at the West Side school, earned the top score in all but one of the 25 exams he took, making him one of the top Advanced Placement performers in Texas and the nation.

“To me it means that all my effort in studying had paid off,” Minton said. “In addition to the intrinsic benefit of learning so many new things, I was happy that I could be recognized for it.”

The AP Scholar Award is granted to the one male and one female student in each U.S. state with scores of 3 or higher on the greatest number of AP Exams, and then the highest average score on all AP exams taken. College credit is granted by many U.S. colleges and universities based on AP exam scores, which is scored on a 5-point scale.

Minton started taking AP courses his freshman year with geography and comparative government but the first time he took an AP test without taking the class was his sophomore year. The only test he received less than a 5 on was the 4 he got on the US Government test.

“It started off with the realization that I would never be able to take all the courses that I would be interested in taking, and so I began learning subjects such as art history as a hobby, which eventually grew into taking 18 tests last year,” Minton said. “The main factors that influenced me were the actual desire to learn the material as well as the hope that I could receive college credit, rather than just the award as a goal.”

Minton’s advice to students taking AP tests is to take advantage of all the resources they can access. “Don’t just rely on your schoolwork or even just a study guide,” he said.

When he enrolls in college next fall, Minton would start off with 60 credits already at a University of Texas flagship school. At a private college, he figures it would get him about a year’s worth of credit. Right now, Minton is undecided about what university he will attend in the fall and what course of study he’ll embark on but is considering a major in physics or computer science at Stanford University.

“Luke is a great role model and example of a well rounded high achieving student,” said Grace Garcia-Runkles, an assistant principal at Coronado. “He embodies the characteristics of a kind, helpful, self motivated, hardworking true academic scholar and is well liked by his peers and teachers. Anyone who knows him is easily impressed by his academic achievements and his positive, personable character. I am excited to see what his future holds for him.”

Minton has a long list of accolades besides his achievements on the AP exams. The International Baccalaureate student scored a 36 on the ACT Composite and a 2,400 on the SAT, was named a National Merit Semifinalist, was named to the All-State Choir and competed on the Coronado High Q Team that won the national Questions Unlimited Quiz Bowl Championship. He is also the only El Paso student to score above 9,000 in the Academic Decathlon. Even with so many accolades, he counts passing the art history AP test among his biggest accomplishments.

“The hardest thing I have ever done, and one of the hardest things I will ever have to do, is learn art history,” he said. “By far that was the most difficult test.”