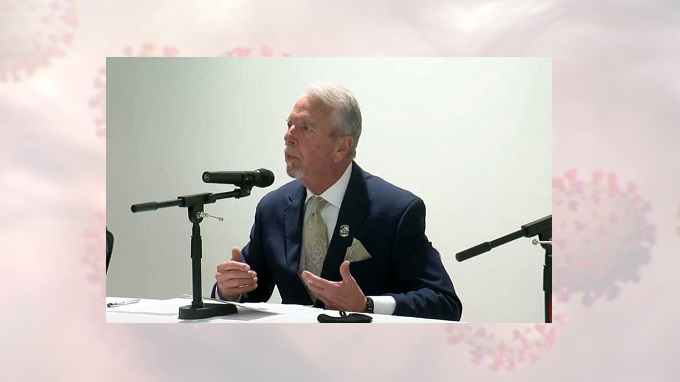 The opinion, requested by Samaniego, answers three key questions posed by the County Judge, his supporters and many community members opposed to his most recent order.

The County Attorney found the following:

Judge Samaniego has issued various emergency orders throughout the pandemic, pursuant to Chapter 418.

2) To what extent is the County Judge’s order affected by emergency orders of the Governor? Texas law only allows the governor to suspend the provisions of any “regulatory statute.”

The County Judge’s Emergency Order No. 13 is not a regulatory statute and therefore not limited by the Governor.

3) In the event of a conflict between the order of a County Judge and a directive by the Mayor, which order prevails?

To the extent of a conflict between an order of a county judge and directive of a mayor, the decisions of the county judge prevail as to the movement of people within the County and occupancy of a premises.12

In summary, the El Paso County Judge has independent emergency powers vested to him pursuant to Chapter 418 of the Texas Government Code. The legislature has not granted the Governor the authority to suspend emergency orders of a county judge. These include but are not limited to the ability to evacuate an area, control the egress and ingress of people, the movement of people and the occupancy of premises, within a disaster area of the county. To the extent that of conflict between an order by a county judge or an order of a mayor of a municipality the order of a County Judge prevails.

In the Friday evening release, the County Judge reminds residents that:

The County Judge’s order encompasses the County of El Paso which includes the the City of El Paso, the Town of Anthony, Town of Clint, Town of Horizon, City of San Elizario, City of Socorro, the Village of Vinton, as well as all unincorporated areas of the County.

Click here to view the County’s Stay Home Order.  The entire order, and supporting documents are included below.