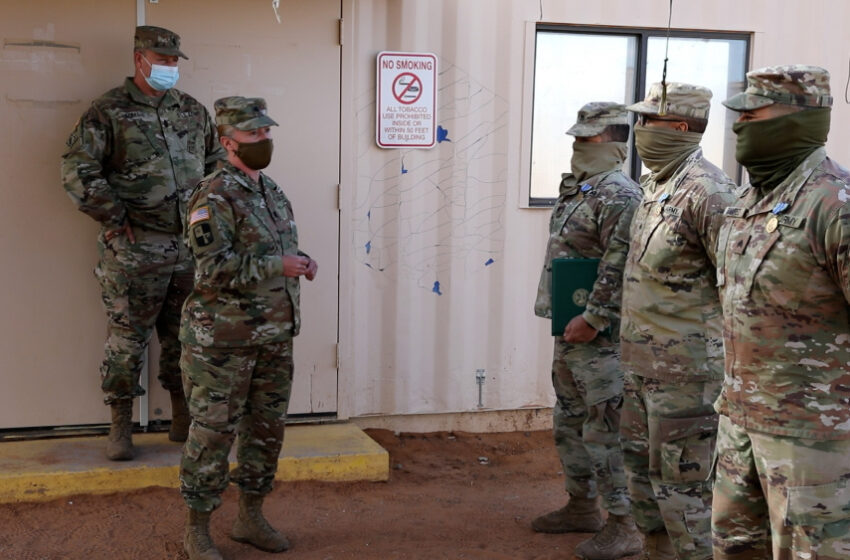 Lt. Col. Traci Earls, commander of the 169th Combat Sustainment Support Battalion, 69th Troop Command, Kansas Army National Guard, left, thanks Soldiers for their hard work and dedication to the mission at a small awards ceremony at Forward Operating Base Westbrook at Fort Bliss, Texas, Jan. 27, 2021. The 169th CSSB, which had originally planned to deploy to Afghanistan in July of 2020, was reassigned to run sustainment operations for COVID-19 mitigation procedures for Soldiers mobilizing to and demobilizing from overseas locations. | Photo By Maj. Margaret Ziffer

They had trained for months. They had prepared. They were ready. In July of 2020, the 169th Combat Sustainment Support Battalion, 69th Troop Command, Kansas Army National Guard, was days away from embarking on their nine-month deployment to Afghanistan.

The steady drawdown of U.S. troops in the Middle East over the past decade has reduced the operational tempo to the point that many members of the unit were eager for the opportunity to support national security objectives abroad for the first time in their careers. The unit anticipated the mobilization with optimism. But then, suddenly, things changed.

“We received the notification that we were being re-missioned just days prior to leaving,” said Maj. Dustin Nash, executive officer for the 169th CSSB. “The force drawdown in Afghanistan was the main factor, but the increased need for COVID mitigation here at Fort Bliss also contributed. It was a perfect storm.”

Now, instead of Afghanistan, the 169th CSSB would be deploying to Fort Bliss, Texas, to run sustainment operations for COVID-19 mitigation procedures at Forward Operating Base Westbrook for Soldiers mobilizing to and demobilizing from overseas locations.

“For a couple days we were disappointed,” said Lt. Col. Traci Earls, 169th CSSB commander. “We had been setting up and training for and focusing on the Middle East. So we were kind of deflated when we got the news that it had changed.”

Because the change was so last minute, the 169th CSSB wasn’t able to learn much about their new mission ahead of time, explained Nash. However, experience proved to be the best teacher.

“When we arrived at Fort Bliss, we quarantined out at FOB Westbrook,” Nash said. “So we had an opportunity to directly experience what COVID prevention measures were being implemented. That allowed us to see what the current unit was doing, and where there were opportunities for us to fix or change parts of the process.”

“We were customers of what was about to be our own product,” Earls said. “That experience fueled the team to treat everyone else like guests.”

Earls said once the team got started, they discovered that were actually many similarities between the new mission and the original mission.

“This is a logistics mission – this is what we do,” Earls said. “We were able to see the similarities and that that training wasn’t just for nothing.”

The difference between this mission and overseas missions, it turned out, primarily came down who the unit was supporting.

“When I was on a sustainment mission in Iraq, the customer was the warfighters on the battlefield, and we made sure they got everything they needed to continue the fight,” Earls said.

“Here, the customer is the Soldiers who have already done the fight and are now coming home. We make sure they’re being treated right.”

Earls said at times, the COVID mitigation mission can be emotional and stressful.

“No matter what mission these Soldiers deployed for, the world is different now than when they left,” Earls said. “There’s no fanfare, no welcome home ceremonies. All those things you think about and you can’t wait for to happen, you get here and there’s only mitigation processes in place to go through, which delays their getting home.”

With that in mind, the 169th CSSB has used this mission as an opportunity to cultivate leaders, personally and professionally.

“It’s about being empathetic, about treating those Soldiers as best as we can during those few extra weeks they have to stay here,” Earls said.
“What I’ve told my Soldiers is, ‘you know how to run logistics. What I want you to take away from this is to be a better leader and a better person.’”

“This mission is centered around customer service, so I hope the members of this unit take that philosophy forward,” Nash said. “So when they are a team leader, a squad leader, a platoon sergeant, a platoon leader, company commander – whatever leadership role they fill – that they truly embrace the idea of servant leadership. We have an opportunity to build on this and increase morale just by the way we operate. I think it they take that kind of mentality forward, it will strengthen the Kansas Army National Guard.”

So although the last minute change was unexpected, unit members seem to agree that the 169th CSSB embraced their new mission and have had a challenging, but rewarding experience.

“While this is still a logistics mission, and we are logisticians, no one has trained for this,” Nash said. “The ability of the Soldiers to adapt and always stay flexible and swing at the curveballs that are coming at them – that’s what I’m most proud of.”

“It didn’t turn out as expected,” Earls said. “But in hindsight, it turned out exactly how it was supposed to be.”