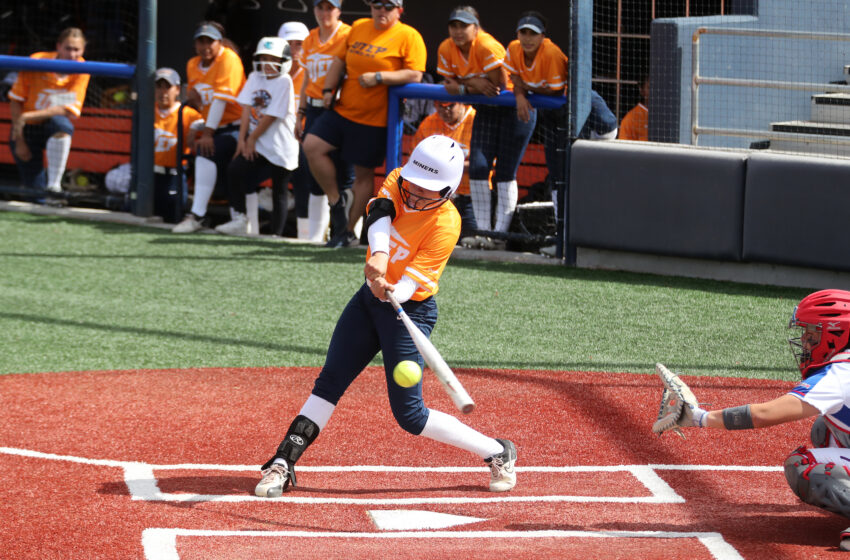 STEPHENVILLE, Texas – UTEP softball’s Marijn Crouwel singled in the top of the seventh that brought in Autumn Scott for a 3-2 victory over Tarleton State (19-15, 4-5 WAC) Wednesday evening.

The Texans were first on the board off a Brady Rowland standup double down the left field line that scored Morgan Medford who drew a walk to lead off for the Texans in the first frame.

Tarleton pitcher Reagan Chism held the Miners to no runs for her first three innings. Kennedy Ferguson relieved Chism in the circle and the Tarleton defense retired all UTEP batters in the fourth.

Katy Schaefer put the Texans up 2-0 in the bottom of the fourth after she doubled to left center plating batting-leader Georgia Capell.

Leading off for the Miners, Cheyenne Stark anchored a base hit after she singled to left field and advanced to second from Savannah Favre’s sacrifice bunt. Toni Gonzalez came up to bat for Aaliyah Rebolledo and drew the first walk of the inning. After Rebolledo relieved Gonzalez, Tarleton brought Julia Wernet in the circle for Kennedy Ferguson. Stark found herself out at third as Zaylie Calderon reached on a fielder’s choice that also advanced Rebolledo to second. Calderon and Rebolledo advanced into scoring position off a wild pitch by Wernet and Lexi Morales joined her teammates in the diamond as she drew the innings second walk to load the bases. An error by Tarleton’s catcher allowed for Rebolledo to score UTEP’s first run of the game and closed the deficit 2-1.

Marijn Crouwel tied up the game, 2-2, in the top of the sixth as she singled up the middle scoring Pate Cathey after she led off the inning with a triple to center field.

Anna Sample led off the seventh inning by drawing a walk which allowed UTEP Head Coach TJ Hubbard to bring in Autumn Scott to pinch run for Sample. Scott advanced to third after Ajia Richard played out a sacrifice bunt that advanced her to second and a passed ball that advanced her to third. Crouwel’s single down the left field line, plated Scott for the winning run, 3-2.

UTEP pitcher Aalijah Alarcon (7-10), who was credited with the victory, held the Texans to no runs after the fourth frame. All but one inning, Alarcon left runners on base and on three occasions she closed out the inning with bases loaded.

Tarleton jumped to a 4-0 lead after five innings. The Texans posted two runs in the third on a two-RBI single by Brady Rowland. Morgan Medford’s double to center field in the fourth and Rowland’s single to center in the fifth extended the Texan’s lead 4-0.

UTEP answered with one run in the sixth. Lexi Morales doubled to center field to score Aaliyah Rebolledo after she singled to left field, landing the Miners on the board, 4-1.

Tarleton’s pitcher Kennedy Ferguson held the Miners to no runs in the seventh to secure the win.