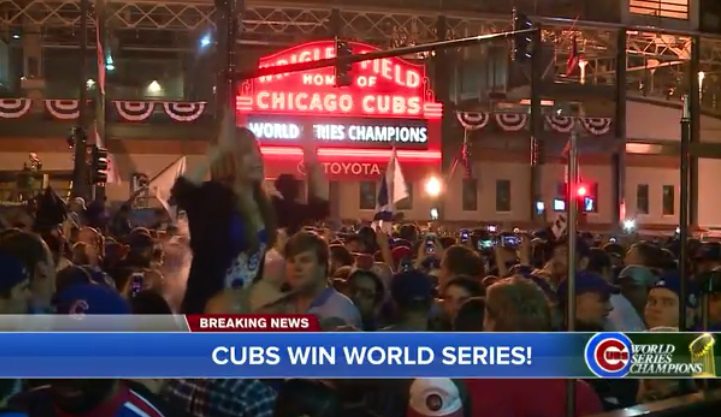 As a St. Louis Cardinals fan, it is frowned upon to wish well on the Chicago Cubs, but after 108 years of waiting, the Cubs are flying the W higher than ever and are World Series champions for a third time in franchise history.

And that makes me feel happy for Cubs fans everywhere.

Sports is the truest form of reality television. There’s drama, suspense, a protagonist, antagonist, supporting actors and a plot that will give the audience the always unpredictable climax. And there’s the odd coincidence or two.

Producing the show this year is none other than Chicago Cubs President of Baseball Operations Theo Epstein, who also helped the Red Sox end their 86-year championship drought in 2004. Theo is now partially responsible for ending the two longest championship droughts in the American professional sports.

In 1908 the President of the United States was also a man named Theo – as in Theodore Roosevelt – gas was priced at 10 cents per gallon and sliced bread was not yet a thing. It was also the last year the Cubbies won the World Series.

The Cubs were winners of 103 games during the regular season, it took all of seven games against the Cleveland Indians.

As far as the finale, the script could not have been written any better by any Hollywood producer.

It was the top of the 9th, the game was tied at six and the rain started pouring. The inning went scoreless and then there was free baseball, but not before a rain delay.

Only fitting for a pair of teams that have two longest championship droughts in Major League Baseball.

The Cubs would jump ahead by two runs at the top of the 10th inning, only to allow Cleveland to cut the lead to one; but that would be the end of it and after trailing three games to one, the Cubs would once again be champions.

But back to those coincidences and events…

This year the Cleveland Cavaliers, led by LeBron James, overcame a 3-1 series deficit to win its first NBA championship over the Golden State Warriors; in an ironic twist that only the Sports world could provide, the Indians blew their series lead by the exact same number: 3-1.

The Cavs win was also the first professional championship for the city of Cleveland since 1964 – when the Browns ruled the NFL. Now it is the Indians who now own the longest World Series championship drought at 69 years.

The last time the Cubs were close to winning a World Series was in 1945, their last appearance before this year.  Only a few years ago, fate intervened again…keeping the Cubs from the series.

Cubs fan Steve Bartman, who was involved in the game six of the 2003 National League Championship Series foul ball snafu, can now take a deep breath and celebrate with the rest of Chicago.

Bartman prevented then Cubs outfielder, Moises Alou from making the catch that would have been the second out in the 8th inning when the Cubs were up 3-0. The Cubs then allowed eight runs and would go on to lose that game 8-3 and lose the series after leading 3-2.

It’s safe to say that Bartman and Alou can now hug it out and celebrate with the rest of Chicago.

Cubs fans also known as “the lovable losers” are losers no more. 1908 is now just a date on a list of championships, followed by another, more recent crown.