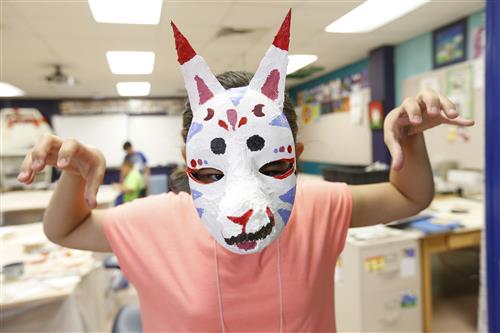 Students participating in the EPISD Cultural Arts Academy this summer will travel nearly 1,000 years to the past to experience ancient Japan’s culture and art.

The academy — a 32-year-old summer enrichment camp attended by hundreds of EPISD middle-school students interested in art, music, literature and history — will focus on Japan’s Heian period that lasted from 794 to 1185 AD.

“This year we are taking a more global approach and exploring periods of great change in both the western and eastern parts of the world,” program director Elisa Barton said. “We focused on this time period in Japan because it’s really a turning point in the country’s history.”

The program will marry east and west with a performance of Shakespeare’s “Twelfth Night” and selections from the Noh repertoire, such as “Hagoromo” and “Kurozuka.” Students have also immersed themselves in Japanese art and literature, creating their own origami puppet movies and writing their own takes on eastern folk tales.

The three-week program will culminate in a performance on June 27 at Chapin High School.

“My favorite part is the theater,” he said. “I like acting, and it’s been cool to learn more about different cultures.”

He hasn’t minded the shift in programming and location.

“I think it’s neat we get to learn something new every year,” Webber said. “It puts a new take on the Renaissance idea.”

Magoffin middle-schooler Americas Huerta is new to the program, but she is already making plans for next year’s camp.

“I think it’s fun. I have already made a lot of new friends,” she said. “I really like that they let use our imagination instead of being at home

Huerta used a fine brush to create a Noh mask, making sure to get the details of the cherry blossom tree on the mask’s papier-mâché surface.

“I got inspiration from one of the girls in the presentation,” she said. “Her makeup was very pretty and dramatic.”

Art teacher Jen Moreno introduced students to the concept of Japanese theater by showing them different kinds of performance masks.

“The majority of the kids don’t get to venture out and learn about different cultures,” she said. “This is an opportunity for them to experience something they have never seen before.”

The performance will take place at the Chapin High School theater at 6 p.m. The event is free and open to the public.