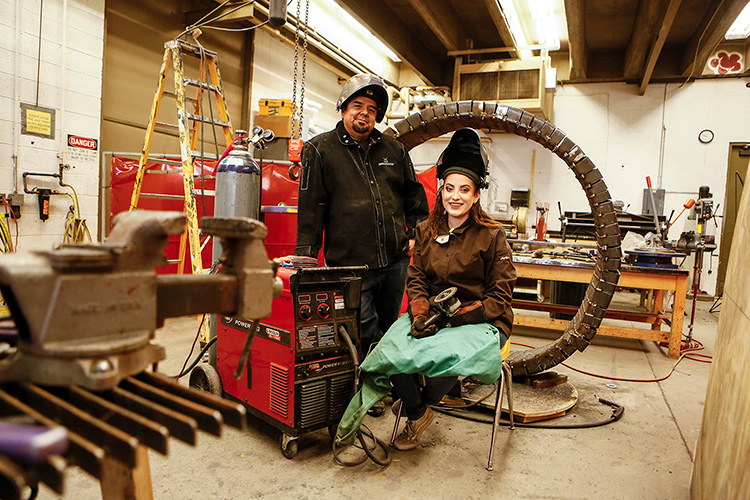 Sparks and screeches jumped from a hand-held grinder as UTEP senior graphic design major Denisse Ortega smoothed out the welds on her large steel public art project that will be on display in the roundabout at Rim and Hague roads starting in January 2019.

The steel artwork titled “The Rim” stands 5 feet 6 inches tall, weighs about 500 pounds, and looks like a giant Hot Wheels loop. When installed, embedded solar-powered LEDs will shine through the sculpture’s crevices at night. The Rim Area Neighborhood Association (RANA) selected Ortega’s artwork as the winner of the initial Rim Roundabout Sculptural Project.

The contest is a collaboration between the association, The University of Texas at El Paso and the City of El Paso’s Museums & Cultural Affairs Department (MCAD). The plan is to schedule these challenges when funding is available.

Ortega, who has spent countless hours on this project from conception to execution, is happy with her work, but happier that she will deliver and install it by the middle of the month. There will be a ceremonial ribbon cutting at 11 a.m. Wednesday, Jan. 23, at the roundabout.

“I’m proud of it,” said the El Paso native during a work break. Yellow earplugs connected by a thin blue cord dangled around her neck and onto her brown welding jacket as FM-84’s “Running in the Night” filled the cavernous room inside UTEP’s Fox Fine Arts Center. “It’s been part of me for so long. It’s to the point where I feel like I can finally breathe.”

Her work on “The Rim” was as frenetic as the spinning grinder blade she wielded. The project’s timeline began with a request for ideas early in the fall 2018 semester, but the collaboration was seeded about a year earlier.

J. Angel Cabrales, assistant professor of sculpture, said RANA representatives initially approached him and David Griffin, professor and chair of UTEP’s Department of Art, with the idea of a partnership during the summer of 2017. Cabrales said he helped design the Rim-Hague roundabout’s base to support a replaceable piece of public art.

“This was important to us because we did not want (this competition) to be a one-time deal,” said Cabrales, who added that the program would educate students about all aspects of the public art process as well as teamwork and time management. “It was important to continue this program so more UTEP students could be part of the public art experience.”

After Cabrales announced the competition to his students, they met with Suzanne Dipp, RANA vice president, at the roundabout, where she gave a brief presentation about the neighborhood’s history.

Ortega said the roundabout’s curved and circular elements were her initial inspiration. The 2014 Montwood High School graduate said she dug deeper into the neighborhood’s history and learned about Adrian D. Storms, an El Paso attorney who assisted 75 families displaced when the Rio Grande overflowed in spring 1897. Storms bought land in an area known as La Mesa, now the Rim neighborhood above El Paso High School, and sold lots for a few dollars each. Ortega incorporated that story and the site’s curves into her concept.

Students showed their initial ideas to Cabrales in early September and then made small models of their ideas, which they used in presentations later that month to a committee that included representatives from the University, RANA, the city, and some local artists. The association selected Ortega’s concept in early October.

Cabrales said the University paid about $3,000 for the artwork’s materials, which arrived in mid-October. At that point, Ortega and about 12 sculpture and graphic design student volunteers put in many late nights to turn her concept into reality.

Dipp, the RANA official, praised the University, Cabrales, Griffin and the students involved for their hard work and dedication.

“I am so impressed with the students,” Dipp said. “They did a tremendous job. I think this project was an incredible educational opportunity for those students, the city and the neighborhood.”

Dipp said the biggest cue she gave the students was that there were no hard and fast instructions. She encouraged them to learn what they could and then use their imaginations. She said some association members said they voted for Ortega’s piece because of its contemporary nature and its use of curves, steel and lighting.

“We thought it was a great concept,” Dipp said. “The use of steel was complimentary to the roundabout. There was a lot of movement. It was just a nice, quality piece.”

MCAD Public Art Program Supervisor Aidee Cosme was involved in the process and said collaborative opportunities such as this one benefit students and El Paso’s art community.

“We are able to enhance an area with a public art piece, as well as provide an opportunity for a new artist to learn about the public art process as well as grow in their field,” Cosme said.

Dipp said she hoped that the program could grow to encompass other parts of the city and serve as a launching pad for the region’s talented up-and-coming artists.