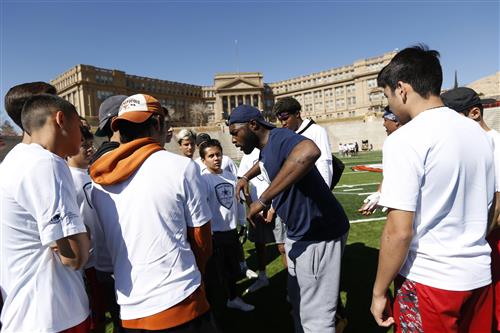 The Cowboy Nation invaded historic Jones Stadium at La High as players and coaches from America’s Team spent the day showing 300 EPISD athletes the successful techniques they use on the football field and in life.

The clinic gave 30 students from each of EPISD’s traditional high schools the chance to meet Cowboy coaching staff and defensive back Byron Jones while honing their skills and tackling new drills.

“Football is such a great game and opportunity and platform to teach the next generation about character development, discipline and teamwork,” said Hunter Harvin, Dallas Cowboys’ manager of corporate partnerships. “Byron wants to talk about his mentality and how he approached the game through high school, college and, then ultimately, now realizing a dream in the NFL.”

This is the second year the Cowboys make their way to EPISD for the camp, which is sponsored by the Texas Lottery.

“I think it’s a great opportunity to come out to Cowboys Country out here in El Paso and show a little bit of love to some of the students who are our fans and supporters,” Harvin said.

“We got a lot of potential with kids that want to play football beyond the high school level,” said Maria Kennedy, EPISD athletic director. “They may not play D-1 (Division I) football, but you there’s somewhere, someplace for all of these kids to go if they really want to play football at the college level.”

Irvin High freshman and Cowboy fan Ivan Rosales stood on the sidelines watching his fellow teammates get some action on the field. The camp left him knowing how much faster and challenging the pros train.

“This is a great opportunity to get better and to learn new stuff,” he said. “I know I will get better. That’s for sure.”

El Paso High’s Santiago Candelaria already feels improvement in his game after only a short time on the field. He’s taken note about on keeping an eye on the hips and shoulders of opponents during plays instead of their eyes.

“It’s just been a great opportunity for everyone,” he said. “We get to make new friends and meet new and share ideas. I’ve learned a lot of things already.”