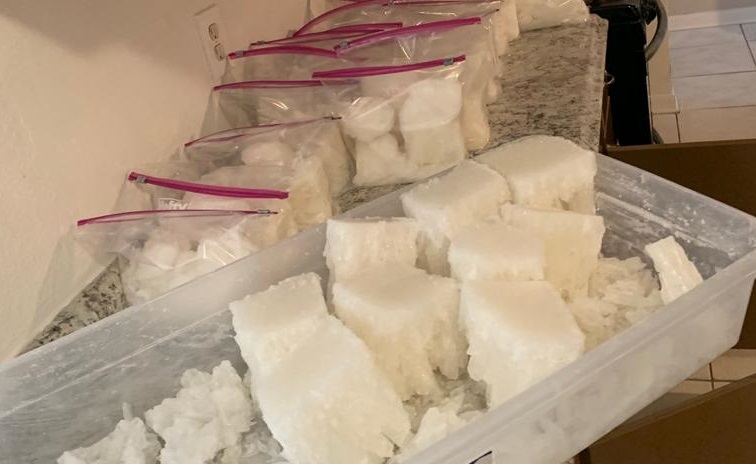 At a press conference in Phoenix, Attorney General Barr and Acting Administrator Shea announced that in just six months, Operation Crystal Shield generated a total of more than 750 investigations, resulting in nearly 1,840 arrests and the seizure of more than 28,560 pounds of methamphetamine, $43.3 million in drug proceeds, and 284 firearms.

In the DEA El Paso Division alone, which covers West Texas and New Mexico, DEA conducted 101 investigations, made 176 arrests, and seized 919 pounds of methamphetamine, $1,165,777 in drug proceeds, and 19 firearms.

“In the months leading up to the launch of Operation Crystal Shield, communities across the United States experienced a surge of methamphetamine,” said Acting Administrator Timothy J. Shea.

“The COVID pandemic locked down many communities and impacted legitimate businesses, but the drug trade continued. Under difficult conditions, DEA – along with our federal, state, and local partners – never stopped working as we helped stem the flow of methamphetamine onto our streets, even as violent drug traffickers sought new ways to smuggle it into the United States.  The success of Operation Crystal Shield reflects the devotion of DEA and our partners to protect our communities from the scourge of drug trafficking and violent crime under any circumstances.”

“By disrupting distribution networks, seizing their profits and putting dealers behind bars, DEA and its law enforcement partners are keeping dangerous drugs like methamphetamine off the streets and making communities safer.”

Together these nine cities accounted for more than 75 percent of methamphetamine seized by DEA in 2019.  Under this operation, DEA directed enforcement resources to these cities where methamphetamine is often trafficked in bulk and then distributed across the country.

Operation Crystal Shield leveraged existing DEA initiatives that target major drug trafficking networks, including the Mexican cartels that are responsible for the overwhelming majority of methamphetamine trafficked into and within the United States.