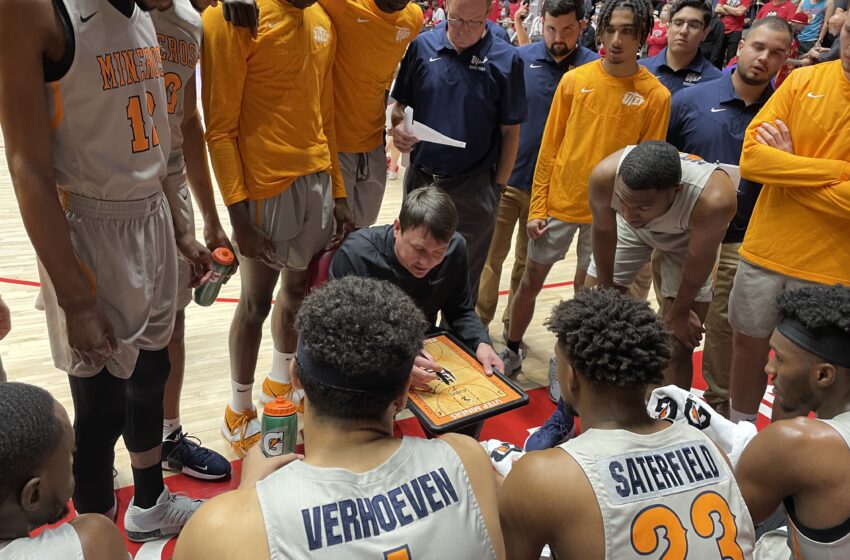 ALBUQUERQUE – UTEP’s Keonte Kennedy erupted for a career-high tying 22 points (14 in the first half), Souley Boum poured in 26 (19 in second half), and the Miners men’s basketball team (5-4) guarded with a vigor to give high-flying New Mexico (6-5) fits in a 77-69 win in front of 9,044 fans inside The Pit Sunday afternoon.

The Miners opened up the second half on a 16-1 run to turn a three-point halftime lead (33-30) into an 18-point cushion (49-31), and the home side never got closer than eight the rest of the way. Starting PG Jamal Bieniemy missed the game with an injury. UTEP was also without the services of Jamari Sibley and Cam Clardy.

The Lobos entered the contest averaging 82.5 points per game, but the Orange and Blue disrupted their rhythm to hold them 14 below their campaign’s average output. UTEP also forced 16 turnovers (10 in first half), which was five above UNM’s seasonal average. The Miners held UNM to 39.7 from the field while connecting on 43.1 percent.

“I’m just extremely proud of that group,” UTEP head coach Joe Golding said. “We’ve had a ton of adversity all year, maybe more so tonight than we’ve had yet. We had to come up with a new game plan in two days, and they came out and just showed incredible toughness. They weren’t scared or afraid of the moment. They just kept believing in the process.

“New Mexico is tough to guard because they space the floor well and have two really talented guards,” Golding said. “We were able to guard the ball screen and did a lot better job protecting the paint. We took a couple of charges.”

The Lobos got on the board first with a pair of free throws before a lay-up by Boum, a driving score by Hollins and a turnaround jumper by Kennedy fueled a 6-0 Miner run. It was a one-point edge (12-11) before a steal and breakaway dunk for Kennedy. After another stop, Verhoeven used good touch for a nifty tap-in to prompt a UNM timeout with the Miners up five (16-11) with 12:24 to play in the half.

The lead was eight (22-14) after a Boum corner trey, but UNM had a five-point trip (two free throws, 3-pointer) to bring it down to a one-possession game.

Maring countered with the old fashioned 3-point play, but consecutive dunks from UNM prompted a Miner timeout with UTEP up two (25-23) and 7:32 remaining in the frame.

After a couple of empty trips by both sides Kennedy knocked down a trey to reinstate a five-point advantage (30-25) with 5:46 to play in the period. It was back-and-forth the rest of the way, and the Orange and Blue carried a three-point lead (33-30) into the locker room.

UTEP stormed out of the gates to start the second half, going on a 16-1 over a nearly eight-minute span. The effort pushed the Miner lead to 18 (49-31), but then the Lobos ripped off 10 straight points to cut the lead to eight as The Pit came alive.

UTEP handled the situation calmly, with consecutive scores from Kennedy (baby jump hook) and Boum (driving lay-up). UNM never truly threatened down the stretch, with the Miners salting away the win.

UTEP gets a little break before coming back to action at home for its “Holiday Hoops” game against McNeese State at 7 p.m. on Thursday (Dec. 16.). Santa Claus will be in attendance, and holiday music will be played throughout the game.

The contest will be one of three straight at home for the Orange and Blue, matching the longest such stretch on the season. Jon Teicher (41st year) and Steve Yellen (19th year) will be on the call, which can be followed on “The Home Of UTEP Basketball” 600 ESPN El Paso, the UTEP Miners App. It will also be streamed on Stadium.

For tickets, fans may call the Eisenberg Family Ticket Office at (915) 747-UTEP, email tickets@utep.edu, or  go online or in person (Brumbelow Building on UTEP campus, 201 Glory Road) Monday thru Friday, 8 a.m. to 5 p.m.