HOUSTON — The Democratic presidential candidates have begun flooding Texas for the final sprint before the state’s delegate-rich primary Tuesday.

Billionaire Michael Bloomberg kicked off the packed homestretch schedule here Thursday morning, branding Super Tuesday as “our chance to nominate a candidate who will liberate us from the insanity of Donald Trump.” Addressing a crowd at a downtown concert venue, the former New York City mayor continued to pitch himself as uniquely able to take on Trump while dropping several reminders of the outsize attention he has paid to Texas while skipping the first few early voting states.

“It’s getting like this is my home away from home,” he said of Houston, later invoking the city nickname inspired by its NBA team. “We need Clutch City to come through.”

Bloomberg has built the largest campaign in Texas — 19 offices and 160 staffers — and his latest tour here marked his sixth trip to the state since launching his campaign in late November, far more visits than any other candidate over the same period. But most of his rivals have far from ceded the state, which will award 228 delegates Tuesday, the second-largest delegate trove among the 14 states voting that day.

On Thursday evening, Elizabeth Warren was also in Texas, for a town hall event with Julián Castro, her opponent-turned-surrogate and the former U.S. housing secretary and mayor of the city. She will also return to Texas on Saturday evening for a town hall in Houston. The next day, Pete Buttigieg will headline an evening rally in Dallas, while Bloomberg will be back in the state for a nighttime rally in San Antonio. On Monday morning, Buttigieg, the former Indiana mayor, will head to Austin for a fundraiser, Tom Steyer will hold an afternoon town hall in Houston, and Joe Biden will spend the day in Dallas and Houston.

“This is the moment in history that we have been called to. This is the moment to choose hope over fear,” Warren said to a crowd of roughly 1,700 people. Warren called Castro “a man who fights with real persistence. … He is the best possible partner I could ask for in this fight.”

The Massachusetts senator, pitching her wealth tax, also knocked Bloomberg — whom she laced into during the Nevada Democratic presidential primary debate.

“There are some billionaires who’ve taken exception to [her plan], and gone on TV and cried. It was so sad, check it out on YouTube,” she quipped. “Others have run for president.”

The flurry of events comes as recent polls show a tight race in Texas between Biden, the former vice president, and Bernie Sanders, the independent U.S. senator from Vermont who barnstormed Texas last weekend. Looming large for some candidates, including Bloomberg, is the 15% threshold that they must cross statewide and in each of 31 state Senate districts to compete for delegates.

While polls make clear only a few contenders will hit the threshold statewide, the others still have an incentive to compete here for district-level delegates. By Thursday, all but a few of the candidates had announced plans for TV advertising in the state — some of them targeting smaller markets such as Odessa and Wichita Falls where they may be able to pick up a few delegates even if they are not viable statewide.

In addition to campaigning in Texas over the next few days, some candidates are sending surrogates throughout the state. Castro is scheduled to make four stops for Warren across South Texas on Saturday, followed by stops the next day in Austin, Dallas and Fort Worth.

“When my campaign was done, it wasn’t a hard decision to support somebody who also believes in an America where everybody counts,” Castro said, introducing Warren in his hometown. He spoke onstage for a few minutes and later indulged in a few selfies with the presidential candidate.

Texas’ significant role in the nominating process this election cycle has given the candidates an opportunity to show off their knowledge of the issues here — as well as some of the culture. After saying Houston felt like his second home, Bloomberg joked that he considered “waiting a couple of more weeks to return, but the combination of rodeo and Lizzo is just pretty tempting.” He also “couldn’t wait that long for another box of Shipley’s,” he said. Warren, meanwhile, kept her remarks about the state brief, only joking that she “[loves] being here, and I love eating here.”

“I may have to cut this short so I can just eat again,” Warren said of San Antonio.

Early on in his remarks, Bloomberg turned more serious as he addressed Trump’s response to the deadly coronavirus outbreak, saying the president was made aware of the threat months ago, “but he buried his head in the sand.” Trump announced Wednesday that Vice President Mike Pence would lead the government’s response to the outbreak.

“These are not things you can jump into, you have to plan and you have to have a staff ready to go,” Bloomberg said, bringing up the public health cuts that Trump has proposed in his budgets. “He’s not leading, he’s reacting — and much, much too late.”

Bloomberg’s pitch found a receptive audience in attendees like June F. Nelson, a 76-year-old Houstonian who said she initially preferred Biden but was turned off by how he handled the Trump-fueled controversy around his son Hunter’s work in Ukraine. She is now fully behind Bloomberg. 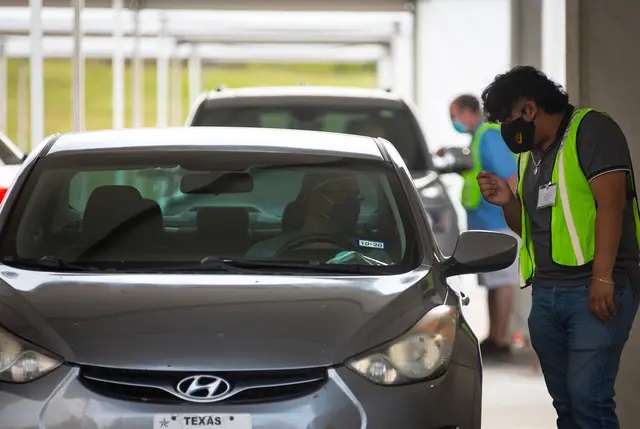