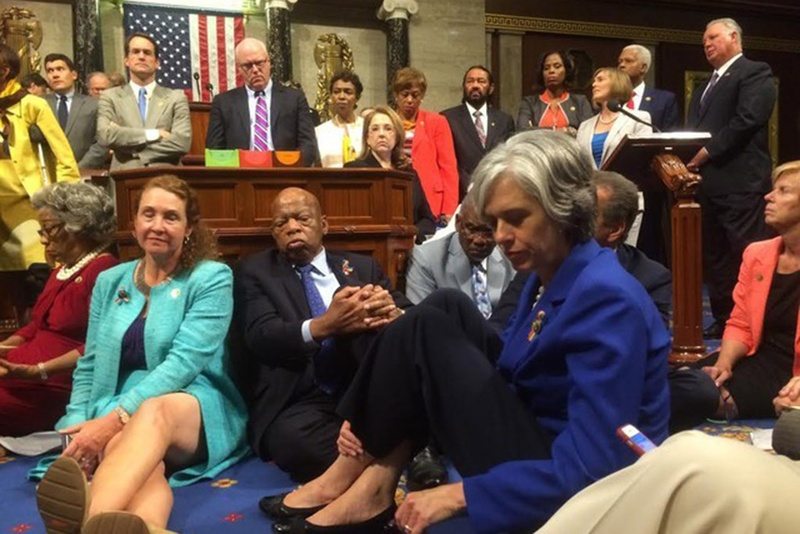 Representatives broke into chaos Wednesday as House Democrats essentially took control over the chamber — but not the body itself — in a push for stricter gun legislation.

The situation simmered all day but boiled over late Wednesday night when U.S. Speaker Paul Ryan assumed the dais to reinstitute normal business and unrelated vote. Democrats — including Texans — shouted the speaker down with chants of “Shame! Shame! Shame!”

The drama deteriorated about an hour later, when U.S. Rep. Louie Gohmert, R-Tyler, engaged verbally with a Florida Democrat on the House floor.

“Where is the morality of this place?” asked U.S. Rep. Sheila Jackson Lee at one point during the hourslong demonstration.

Jackson Lee, a Houston Democrat, spent hours Wednesday sitting on the floor of the U.S. House nodding and responding to her Democratic colleagues’ demands for increased gun regulation.

Jackson Lee and most of her fellow Texas Democrats were part of an unconventional procedural tactic that became known as “the sit-in” on Capitol Hill. Democrats essentially overtook the chamber by literally camping out on the floor and demanding U.S. House Speaker Paul Ryan allow a vote on gun control legislation in response to a recent shooting at a gay nightclub in Orlando.

Democrats of almost every pocket of the caucus took part in the collective action brought regular business in the U.S. Congress to halt, and at least one round of votes lapsed over the course of the day.

The unique tactic was something of a hybrid of the group filibuster — a floor procedural move that is exclusive to Senate rules — with the Civil Rights-era sit-ins of the 1960s. U.S. Rep. John Lewis, D-Georgia, a Civil Rights icon, emphasized that historical connection by leading the charge among his colleagues Wednesday.

Democrats were largely focused on securing votes on measures aimed at preventing suspected terrorists from buying firearms and expanding background checks. Frequently, the chamber broke into cheers of “No bill, no break!”

But even as Democrats demanded a vote from Ryan, they were doing so with their smallest caucus in modern history. The trouble gun control activists found earlier in the week in the Senate would likely only face tougher resistance in the GOP-dominated U.S. House.

Along with Jackson Lee, nearly every Texas Democrat in the delegation contributed to the effort in their own ways. Most observed from their seats in the chamber. U.S. Reps. Marc Veasey of Fort Worth and Joaquin Castro of San Antonio each delivered fiery speeches.

Republicans mostly avoided the pyrotechnics. But the drama came to ahead around 10 p.m. Eastern Time when Republicans assembled onto the floor for a vote over whether to override a presidential veto that did not pertain to the gun issue.

Democrats shouted over Speaker Paul Ryan when he gaveled in the late-night vote. Amid the unrelated vote, House Democrats broke into a rendition of “We Shall Overcome.”

Republican members — including many Texans — watched the demonstration with grim faces.

“Democrats have had repeated votes on their amendments and on their bills, both in the Senate and, for example, in the Appropriations Committee, amendments on the House floor. And they lose repeatedly,” U.S. Rep. John Culberson, a Houston Republican, told The Texas Tribune. “It’s just a publicity stunt.”

“And they demean the House, and they demean themselves because it denies everyone a chance to have our voices heard, to debate and to vote on behalf of our constituents,” he added. “They’re damaging the entire Democratic process as well as their own credibility.”

Gohmert’s Texas GOP colleague, U.S. Rep.Bill Flores, gently tried to pull him away from the confrontation.

Brown, a firebrand in her own liberal corner, has district lines that cover The Pulse, the gay nightclub that as the setting of the most recent shooting massacre that set these political events into action.

The situation escalated with multiple members of both parties shouting near the speaker’s dais.

U.S. Rep. Debbie Dingell, a Michigan Democrat, successfully led Gohmert away with her arm around him. Gohmert pointed to Dingell in an interview last year as a friend from across the aisle.

Ryan’s office opted to turn the House cameras and microphones off during the event, in accordance with previously agreed-to House rules.

“The official House feed has been switched off,” C-SPAN, the congressional cable channel, stated on its channel and website after many viewers questioned why the network wasn’t carrying the demonstration live. “C-SPAN does not control it.”

Without the microphones and cable stream, the House proceedings took on an archaic feel. Democrats quickly found work-arounds.

U.S. Rep. Beto O’Rourke, an El Paso Democrat, entered the chamber midafternoon and initially observed the action seated alone. But after many speakers decried that the chamber cameras were not turned on, he took to using his phone to transmit the event live on his Facebook page and Snapchat. At times, thousands of people on Facebook were monitoring his video.

He remained stationed in his position for at least 10 hours, with few breaks.

Eventually, C-SPAN opted to temporarily broadcast the feed captured by O’Rourke’s phone, as well as ones from other lawmakers.

Few on Capitol Hill would predict when — or how — this episode would end. Some Democrats said the caucus was prepared to maintain their demonstration all night Wednesday and into Thursday.

“The House cannot operate without members following the rules of the institution, so the House has recessed,” said Ashlee Strong, a Ryan spokeswoman.

The strategy, per a House GOP staffer who declined to speak on the record, was to not engage or bring more attention to the events.