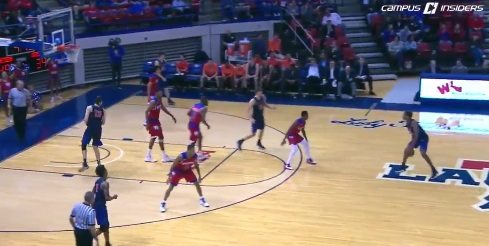 RUSTON, LA. – The UTEP men’s basketball team played one of its better halves of the season on Thursday night in Ruston, but LA Tech proved to be too much for the short-handed Miners over the last 20 minutes.  The Bulldogs pulled away from a slim 28-25 lead at the break and cruised to a 64-44 victory.

The preliminary indication on Willms was a sprained ankle on his non-fractured foot.

“I was proud of how our guys played for a half,” UTEP coach Tim Floyd said.  “It looked like when Matt Willms went down with his injury, we just lost a lot.  We have been challenged with our bench all year long.  Attrition really catches up to us when we get to our bench.  From the three spot where we lost Lee Moore and Josh McSwiggan, we have had real issues.

Tonight between Jake Flaggert, Trey Touchet and Deon Barrett, we had 52 minutes and 0-for-8 from that position.  We can’t seem to find the right spark to come in and give us a lift there.”

The Miners played very well in the first half, shooting 42.3 percent from the field and holding LA Tech to 32.1 percent.  In the second half the Bulldogs shot 42.9 percent, made six threes and held UTEP to 25 percent (6-for-24) from the field.

Erik McCree scored 19 points with 11 rebounds for the Bulldogs, and Jacobi Boykins added 14 points, seven rebounds and three steals.  McCree scored seven points during the 15-0 run.  He finished 6-for-10 from the field, 3-for-7 from three-point distance and 4-for-5 from the line.

Omega Harris scored 23 points, one shy of his career-high, to lead the Miners.  Only four UTEP players scored as Thomas tallied 12 points, Dominic Artis six and Willms three.  Thomas scored in double figures for the second time as a Miner.

“Paul Thomas got into foul trouble along with Willms’ injury and when we had to go to our bench again, it further changed,” Floyd said.  “We’re just not very deep, we can’t have many things happen negatively for our team right now because every possession is absolutely huge.  Injury and foul trouble, along with just being challenged with our third perimeter spot tonight, were all issues in the game.”

The Miners committed 19 turnovers, leading to 20 points for the Bulldogs – including 13 in the second half.

UTEP will wrap up a three-game road swing at Southern Miss on Saturday at 3 p.m. MT.