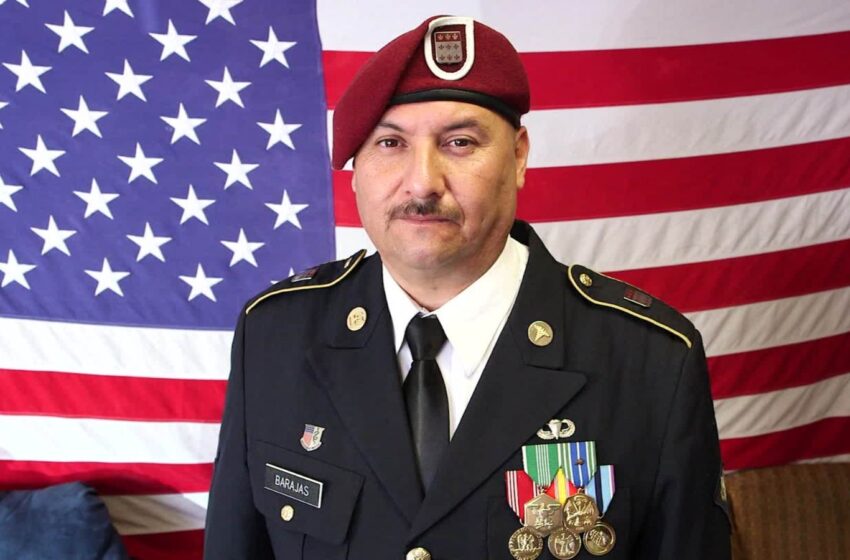 Hector Barajas-Varela,  who has been an international voice for deported Veterans received the news he’s been waiting on for nearly a decade and a half, on Thursday he was granted his United States citizenship.

Barjas-Varela was born in Mexico and came to the United States as a child at age 7. After graduating from High School he decided to serve his country and enlist, becoming part of the 82nd Airborne Division of the Army from 1995 to 2001 as a paratrooper, where he was given his honorable discharge.

Shortly after leaving the Army, he was convicted of a felony for having shot at a car, injuring no one. He served his time in a California prison and was released in 2004, when he was then deported.

Since his deportation in 2004, it has been an uphill climb.  Having built a new life in a country he had never known, Hector found the strength to help others and he founded a support  group in Tijuana – Deported Veterans Support House – dedicated to assisting with housing, food, and other basic needs.

According to the group, Banished Veterans, since 1996 there have anywhere between 8,000 to 40,000 veterans who have served in our United States military and then found themselves exiled from the country they defended.

Baraja-Varela’s wife and daughter and the rest of his family have counted the years along with him, waiting for him in the United States.

California Governor Jerry Brown granted a historic pardon to Barajas-Varela  and two other Veterans in 2017, which would not grant them citizenship, but it would help with appeals to federal immigration authorities.

Upon hearing the news on Thursday, Hector could no longer contain himself.

“Fourteen years, man,” he said, his voice filled with emotion. “Oh my God, this is great. Hallelujah! Hallelujah!”

“I’m coming home, mom!” he told reporters when he was given the good news.

Thank you Jesus !! CITIZENSHIP GRANTED!! ALL AMERICAN AFTER 14 YEARS.DEPORTED IN 2004 Thank you Nathan Fletcher James Erselius Jennie Pasquarella Norma CP Alor Calderon Hectorb Barajasvarela Latham & WatkinsAll our supporters please visit deportedveteranssupporthouse.orgDeported Veterans Support HouseYolanda Varona Jack Aviles Ezekiel Ivy Tijeras Josefrancisco LopezHectorb BarajasvarelaNaturalization Oath Ceremony isFriday 13, 2018 10AMUSCIS 1325 Front Street 4th FloorSan Diego ,CA 92101SPC B 82nd Abn US Army 95-2001Honorably Discharged I was Deported after serving a prison sentence after my military service in 2004 , Deported for 14 years.Caught my case in 2001, I am not proud of what led to my Deportation, but i'm very proud of my Service & advocacy today.I believe I am no less American because of my bad decisons.This whole ordeal has broken me & made me a better man.Thank you Jesus!! I have a special request friends & family please consider donating towards our paypal banishedveteran333@gmail.comto make sure our facility continues to stay open.visit deportedveteranssupporthouse.org for more info on our fiscal sponsor , donate via check, campaign.With that in mind a special thanks to everyone involved.Jennie Pasquarella , James Erselius with Latham & Watkins for representing meMariela Sagustame & Margaret Stock who helped with my case early on. Nathan Fletcher who worked on the Pardon, Steering Commiiteee Norma chavez, Heidi Martinez, Gov Jerry Brown , everyone who has helped keep our doors open, volunteers, supporters, Congressman & women who have visited us and introduced legislation. & everyone who wrote Letters of Reccomendation.Donate , donate , share, share..I have made a commitment for another year, To make sure our Bunker stays open and our work continues