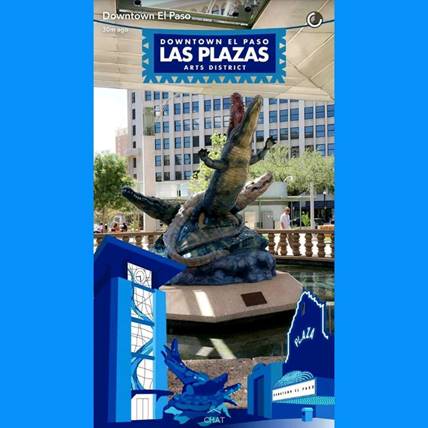 The Downtown Management District (DMD) has partnered with downtown-based marketing agency Mithoff Burton Partners to design and submit geofilters to Snapchat based on established downtown districts.

If you’re not sure what “geofilters” are, or what “snapchat” is, don’t feel bad – in this age of social media momentum things move fast.  The latest social media app to capture the essence of sharing your personal story is Snapchat.

A photo-based mobile application that allows you to capture your daily moments with photos and video. Geofilters are graphics you can apply to your photo that is unique to the geographical location you are taking a photo in.

In July of 2016, Viva + Impulse Creative Co. designed and successfully submitted two downtown El Paso geofilters to Snapchat. The DMD sought to take their creative initiative and expand on the generous contribution to the community via social media. The DMD designs are decidedly focused on established downtown districts. “We felt so thrilled that a local design agency would take the time and effort to create and submit a downtown geofilter that it spurred us to do the same,” said Joe Gudenrath, Executive Director of the DMD.

Part of the experience in downtown El Paso is the pedestrian friendly atmosphere that is already being enjoyed by Pokemon players on a daily basis. “Downtown lends itself to the social media experience in a great way by being walkable and picturesque,” said Rudy Vasquez, Marketing and Communications Manager for the DMD.

The DMD approached Mithoff Burton Partners (MBP), an agency familiar with downtown clients such as the El Paso Chihuahuas and the Mills Plaza Properties, to provide some input on the proposed community geofilters. After several creative meetings, designs were submitted and ultimately approved by Snapchat on Wednesday, August 24, 2016.

“The idea was to create geofilters that accurately represent the community identity of downtown. One of the goals of the DMD is to create an identity in downtown that is consistent and indicative of who we are – the five districts do just that. Now you can take your photo with the applicable geofilter in four of the five districts – Union Plaza’s geofilter is still pending approval,” said Joe Gudenrath.

Robert Burton, Digital Content Planner for MBP, echoed that ability.  “We wanted to create geofilters that followed the umbrella theme of our Downtown, “Authentico”, and still give contributors relevant choices for any District they happen to be in,” he said.  He added, “Part of the uniqueness of Downtown EP is the diverse districts.  So we wanted to develop geofilters that in essence, say, ‘I’m in one of the Plazas of the Arts District,’ or ‘I’m shopping in El Centro.’  We think people will begin using these filters when they’re in Downtown EP – they not only look good, they’re fun.”