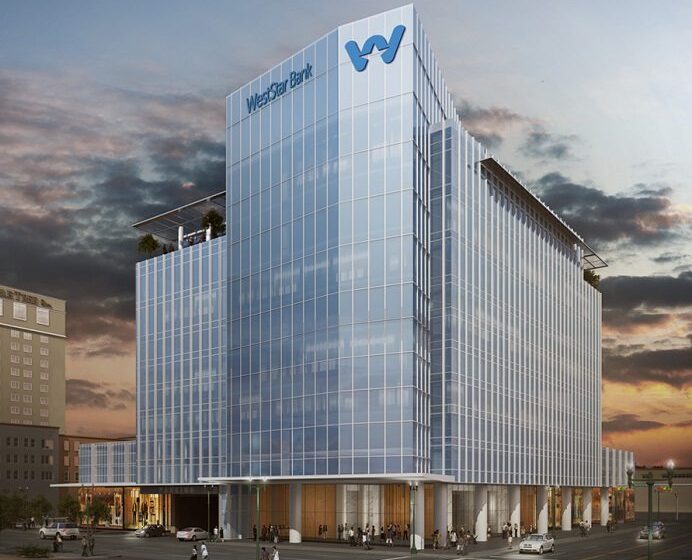 This would be the first high-rise office building to be built in Downtown El Paso in almost forty years.

The building will consist of fourteen floors and include eight levels for office space, five levels of parking (open to public), and ground floor retail space.  The complex will also feature park-like green space available for use by the public.

The new commercial building will be named WestStar Tower.  WestStar Bank (“WestStar”) will relocate its main bank and combined operations from 500 N. Mesa Street to the new office building which will serve as the corporate headquarters for WestStar.

WestStar will occupy three floors of the building and will also have a commercial bank operation on the ground floor.

WestStar will bring an additional 35 employees to Downtown El Paso.  In total, WestStar Bank and its affiliates will have approximately 180 employees working in the new location at 601 North Mesa.

Frederick “Rick” Francis, Chairman and CEO of WestStar Bank said, “We are excited to be closer to the start of the construction phase of a state-of-the-art class “A” office building in Downtown El Paso. WestStar Bank has always had a presence downtown and we are proud to continue that legacy and put our name on this project.”

WestStar Tower will be constructed on property purchased by Hunt Companies in 2014.  At the time, the land purchase was part of an exploratory effort by Hunt to potentially relocate its offices downtown, as well as identifying a suitable site for other office and retail use.  Since then, Hunt has had numerous discussions with the City of El Paso regarding the building’s usage, public amenities, and new-construction incentives, and received approval by City Council on September 19.

WestStar Tower, LLC is still in discussions with the County of El Paso, and hopes to receive the County’s approval soon.

“This is fantastic news. The energy and excitement surrounding this new high-rise development in Downtown El Paso is a welcomed addition to our collective community efforts to continue to make the center of our city an inviting and vibrant place,” Mayor Dee Margo said.

“We are very pleased that the City has given their full support to this unique downtown project,” said Josh Hunt, Executive Vice President of Hunt Companies.  “We hope to wrap up our discussions with the County in the very near future and receive their approval as well.”

Hunt Companies will move its headquarters from Mesa Street on the city’s west side to the new facility in Downtown El Paso, bringing approximately 175 employees to the Downtown area.  The office building will serve as the corporate headquarters for Hunt, occupying three floors of the building.

The Hunt Family Foundation will also be located in the building.

“We are proud to lead this project as part of our efforts to develop and revitalize Downtown El Paso.  Our hope is that the new WestStar Tower will serve as a catalyst for continued growth in the heart of our city,” said Hunt.  He added, “It is our intent to create a premier downtown location.”

“The City of El Paso is committed to creating an environment that is conducive to strong, sustainable economic development.  Our commitment to economic development is resonating with the private sector and producing results. A new tower in our Downtown is the type of catalyst that will help spur continued economic growth to provide El Paso with more choices to live, work and play,” City Manager Tommy Gonzalez said.