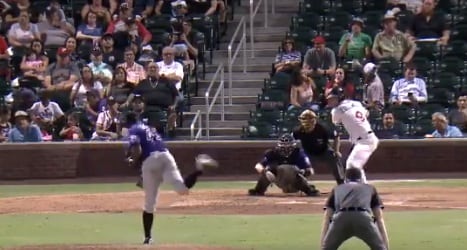 Yep, the Chihuahuas did it again – another win at home. The Dogs marked their 16th consecutive home game win and the ninth overall on Thursday with a 14-2 pummeling of the Albuquerque Isotopes.

The win was the fourth consecutive home series sweep and put El Paso 9 1/2 games ahead of the Salt Lake Bees, their nearest competitor in the PCL Pacific Southern Division. The Bees won 8-6 on Thursday to the Las Vegas 51s.

The El Paso pitching staff and defense whipped through the ‘Topes, who were only able to score two runs in their nine innings. The Dogs lineup, on the other hand, started in the first inning with two-run long ball to center field, El Paso 2-0.

The Chihuahuas scored another run in the third inning on a gift from the Isotopes. Brett Nicholas hit a ball to first base with the bases loaded that appeared prime for a double play but was misplayed and got home a run instead, El Paso 3-0.

‘Topes starting pitcher Peter Lambert (6.29 ERA), who went four innings, tried to get a fastball by right fielder in the fourth inning and was surprised by a three-run blast that went to right center between the Dog House seats, El Paso 6-0.

Albuquerque scored their first run off of El Paso starter Cal Quantrill (2.74 ERA) in the fifth inning with a no-doubter that flew low and fast over the center field wall into the Green Seats, El Paso 6-1.

Completely unfazed, the Dogs came back at the bottom of the fifth and showed the ‘Topes how to do it with a three-run bomb by Shane Peterson into the Dog House, El Paso 9-1.

The ‘Topes scored their last run against Quantrill in the sixth inning on a gift from the Chihuahuas outfield. Noel Cuevas hit a fly ball to right field that would have certainly been an out most other times, but this time kicked off the glove of the right fielder and instead scored one run, El Paso 9-2.

The El Paso lineup was poised to get that run back in their half of the sixth and did so courtesy of a Nicholas RBI single and Peterson, who singled in another two runs, El Paso 12-2. Peterson (.278 BA) had a great night, getting five of the Dogs RBIs.

The hungry Dogs lineup took their last bite out of the ‘Topes pitching staff in the eighth inning with a – you guessed it – Peterson RBI single to center field and a Dusty Coleman fielder’s choice hit that scored Nicholas from second base, El Paso 14-2.

Top prospect Luis Urias (.295 BA) continued punishing opponents and extended his hitting streak to 12 games – a team high for 2018. Franmil Reyes had the record prior with an 11-game hitting streak.

#9 on the field and on the scoreboard!@DustyColeman8 gives us 9 runs on the night with this 3 run blast in the 5th pic.twitter.com/opaiHFZx6R