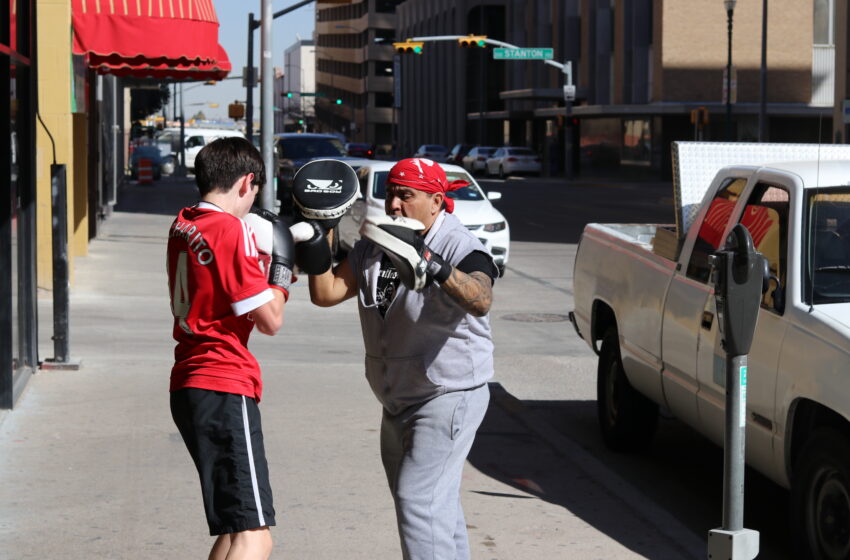 Thursday was a bad day for me. I was ready to give up on everything. Had a meeting that didn’t go as planed, lost out on a photography job I was working on.

I was ready to toss in the towel.

To try to cheer myself up, I starting walking around, and taking pictures of anything that caught my interest in downtown. That was when I found new inspiration, and hope for the younger generation.

I had just taken a photo of the KRESS sign, on Mesa Street, when I saw this kid. He looked to be thirteen or fourteen years old. He’s skinny as a beanpole, running faster and harder than I have run in a long time.

It’s not often – if ever – you see a kid running around downtown El Paso wearing boxing gloves, but here he was. Who was he? What was he doing? I just had to find out.

I began walking back towards Texas Street, and that is where I noticed another guy standing outside of a gym, Backstreet Brawlers, wearing the type of gloves a boxer would hit. I see the kid come around the corner, from Stanton Street.

He comes up to this guy, and they start to spar. Right there, in front of anyone walking, or driving by, they are sparing. After a few minutes, the kid takes off running again.

The kid is Fernando. He is training at Borderland Brawlers Boxing Club to build up confidence, stamina, and to be able to defend himself if the need ever arises. After watching Fernando for about thirty minutes, I can tell he is committed to what he is doing; and after visiting Borderland Brawlers, he’s not the only one.

I met with the the trainer, Gerardo Hernandez, who also owns Borderland Brawlers. Gerardo introduced me to some of the most committed individuals I have ever met in my life. They range in age from fourteen to twenty-eight years old. They come from diverse backgrounds, but are all committed to some of the same ideas, and principles: to being the best at whatever they do and helping others along the way.

Gerardo says that everyone who comes to his gym are like family to him, and each other. They are that close. They workout together, train together, sweat together. After just a few minutes of conversation, you can tell he really cares about those he works with.

Before opening the gym, Gerardo worked for the City of El Paso Animal Regulation Department and the Marriott Hotel. While the gym opened in September 11, 2008, he started training people in 2004.

At first, the gym was not officially open to the public. That changed in 2013.

Gerardo went into boxing, first, for himself. He wanted to lose weight. Being a good father, he took his sons with him. In the end, he continued to let his sons box. “It became an expensive habit,” he says. Opening a gym was a logical step to continue a hobby that has become his passion.

One group he works with and trains are kids. This training builds their confidence, their stamina, and allows for them to defend themselves.

Gerardo’s message to the youth of our city is, “don’t be a victim, and don’t bully.” But there are others in the gym, with more advice and experience to learn from.  John Pitts IV  is another inspiration; he follows Gerardo’s advice with his own: “be the better person, but don’t be stupid.”

Learning his story, and talking to some of the youth in the gym, they look up to him – with good reason.

Pitts is twenty-eight years old, a veteran of the United States Army, and owns two businesses in town. Boxing, he says, is the next chapter in his life.  A very busy life that stretches from Europe to the Midwest to El Paso.  A life where being the best will take you places, and being the best is what Pitts is good at.

He hails Germany, his mother is German and his father was served in the United States military, while stationed there. Pitts has always liked the nature of boxing  and growing up, he had his mother as an example. She used to be a professional boxer herself, in Killeen, Texas.

Pitts also played football for Ohio State as a wide receiver and a defensive end in 1988; he has worked in the oil fields, and was in charge of transportation in the First Cav. Now, he is an engineer – and a dispenser of sage advice.

“Keep your head up, there is a Higher Power…keep one foot in front of the other, keep marching forward and you will get to where you want to be,” Pitts says before returning to his workout.

Back to Fernando. Several times a month this kid is downtown, working out at the gym, and he is not the only youngster there.

Enrique Munoz is fourteen years old. Already, at such a young age, he holds a black belt in Tae Kuon Do. He has his mind set on being a professional boxer. Not just the Golden Gloves, but all the way to the top.

Enrique has only been at Borderland Brawlers Boxing Club for one month. Yet, the hour I spent watching him go through his routine with Gerardo, he already seems like a seasoned professional working to stay on top of his game before his next fight.

No matter how old you are, you are subjected to a very strict regimen at the gym. You work with the body bag and punching bag. They work on their stamina, and footwork. In a way, they work out harder than I ever have in my whole life.

No matter how hard the routine, they don’t give up.

Part of the workout Enrique, John, and others were doing was sparing with Gerardo for three minutes. Then, when a loud beep sounded, they would take off, and run up and down sets of stairs while the next person stepped in to train with Gerardo. In between the stairs and throwing punches, they were working on body bags, doing push-ups, or jumping rope.

All with a drive and desire you don’t see very often.

Then there is Juan Gloria. He is fourteen years old from Jefferson High School. For the past eight months he has been training at Borderland Brawlers, and is set to have his next sparring match this coming week.

Juan is pursuing a future in boxing because of his father. His dad was not a boxer, but loves the sport, and he wants to be part of this for his father. Juans goal, what he wants out of boxing is to help others, help them reach their goals, and be a professional. He already has that down.

While I was at the gym, Juan was helping others while he was doing his workout. In fact, they all were helping each other, giving life to what Gerardo said, that they all become family to each other.

And they are not the only ones chasing dreams. There is Carlos Alverez, another fourteen year old that trains with Gerardo. There is also Arnold Herrera Jr., Dario Ferman, Braulio Ayala.

Braulio, by the way, has already won his first fight in a knockout.

Watching them all, seeing the determination they have, the desire to excel, the passion they bring to the sport and their training is amazing. To know that there are individuals, who are so young, and so committed to what they do, it gives one hope for the future direction of our communities, our city and our country.