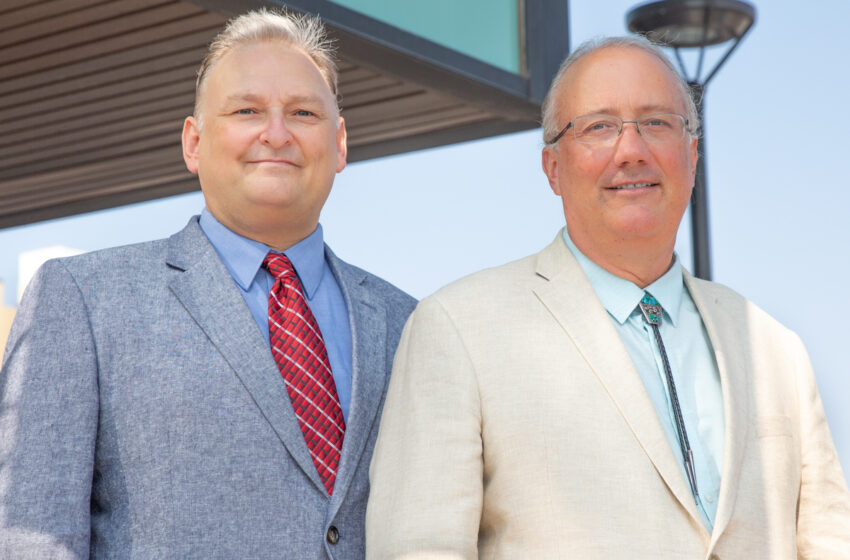 Arterburn, a Regents professor in chemistry and biochemistry at New Mexico State University, and Prossnitz, a professor in the Department of Internal Medicine at The University of New Mexico Comprehensive Cancer Center, met after a regional scientific conference in 2003.  Arterburn told Prossnitz about some compounds he had developed that might help Prossnitz’s research. The two quickly realized that their work dovetailed nicely.

Arterburn, a medicinal chemist, had derived compounds from estrogen that Prossnitz could further modify to make fluorescent. The molecules lit up under a microscope, allowing scientists to see where their receptors were displayed on cells. Arterburn could further change the compounds’ properties by adding or removing atoms from their molecules.

Prossnitz, a molecular biologist, was studying breast cancer cells and their receptors. He was particularly interested in why some women who initially respond to breast cancer drugs later develop resistance to them, allowing the cancer to recur. When it does, it usually recurs more aggressively.

Prossnitz’s lab had discovered a receptor called GPER on the surface of breast cancer cells, which, when triggered by estrogen, increased the cells” cancerous behavior. Prossnitz was looking for a method to control how GPER responded; Arterburn’s compounds would help him see how the receptor interacted with estrogen.

So, with a pilot grant from the Cowboys for Cancer Research Foundation, the two began working together. Arterburn would create compounds in his lab and send them to Prossnitz for testing. The pilot funding would eventually lead to more than $8 million in research support, but those initial dollars meant a lot. “Those were personal donations,” Arterburn says. “People have lost [loved ones] or been affected by cancer.”

The pilot funds paid for the specialized substances and personnel they needed to carry out their first experiments. “Every nickel of that money goes right into supporting research,” Arterburn says.

Using Arterburn’s molecules, Prossnitz discovered that GPER responded to breast cancer drugs that shut down the estrogen receptor in the nucleus of ER-positive breast cancer cells. He showed that some of these same drugs also activated survival and growth signals in cells through GPER, an action not known when these drugs were developed. It may explain why some women develop resistance, he says.

Prossnitz and Arterburn worked with Larry Sklar, who leads UNM’s Center for Molecular Discovery, to find two molecules that greatly affected how GPER responds. One, called an agonist, activates the receptor. The other, called an antagonist, shuts it down.

To find the first compound, they screened a collection of 10,000 molecules. But to save time and effort, they enlisted help from UNM colleagues Tudor Oprea, and Cristian Bologa, who applied computational biology techniques to narrow down the search. “Instead of physically testing 10,000 compounds, we physically tested the top 100,” Prossnitz says. “They cut our work down a hundred-fold.”

Prossnitz, Arterburn and their colleagues obtained a patent for the compounds in 2011. Then, in 2017, a start-up company called Linnaeus contacted UNM.STC, a non-profit that oversees the transfer of UNM-developed technology. Linnaeus wanted to license the agonist for use in combination with immune therapy for melanoma.

Melanoma, like breast and some other cancers, was shown to respond to estrogen. Linnaeus’ founders’ initial studies suggested that the combination of the GPER agonist and immunotherapy might help the body destroy melanoma more effectively.

Linnaeus is currently carrying out pre-clinical studies. If they go well, Linnaeus will begin human trials at a few sites around the country, led by the UNM Comprehensive Cancer Center.

“This could be the first example of UNM basic research in cancer that goes from initial drug discovery and cell biology to clinical trials,” Prossnitz says. “It’s always a long shot.” But he and Arterburn hope it one day could change cancer treatment.

Editor’s Note: Eric Prossnitz, PhD, is a professor in UNM’s Department of Internal Medicine, and chief of the Division of Molecular Medicine. He directs the Cancer Biology and Signaling research program at the UNM Comprehensive Cancer Center.

Jeffrey Arterburn, PhD, is a Regents’ professor in the Department of Chemistry and Biochemistry at the New Mexico State University. He served as director of the New Mexico IDeA Networks of Biomedical Research Excellence, NM-INBRE, from 2001-2016. He is also a member of the Cancer Therapeutics program at the UNM Comprehensive Cancer Center.

Larry Sklar, PhD, is professor in the UNM Department of Pathology. He serves as director of the UNM Center for Molecular Discovery and leads the Cancer Therapeutics program at the UNM Comprehensive Cancer Center.

Tudor Oprea, MD, PhD, is a professor in the UNM Department of Internal Medicine, and serves as chief of the Division of Translational Informatics. He is a member of the Cancer Therapeutics program at the UNM Comprehensive Cancer Center.

Cristian Bologa, PhD, is a research professor in the UNM Department of Internal Medicine, Division of Translational Informatics, and a member of the Cancer Therapeutics program at the UNM Comprehensive Cancer Center.