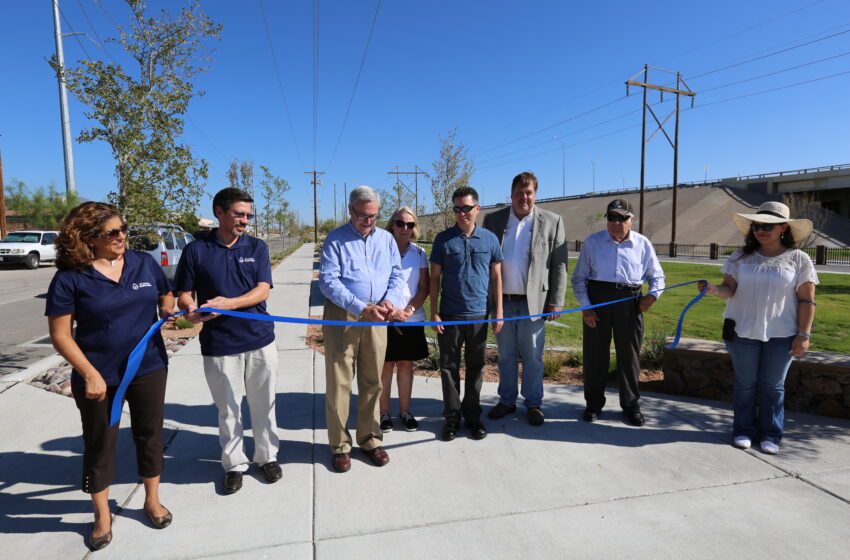 Community leaders and neighbors gathered for a ribbon cutting earlier this week at Pollard Park Pond in Central El Paso. Neighbors expressed appreciation for improvements they say have deterred illegal dumping and improved the overall look of the area.

Jorge Almada, president of the Central Neighborhood Association, had been trying for years to get the strip of land cleaned up. He finally saw his efforts come to fruition when the park pond was completed earlier this summer.

“This used to be an empty lot full of weeds, trash, mattresses,” he said. “Now look at the difference.”

The event spotlighted the completion of Pollard Park Pond, one of several projects designed and constructed to improve flood control in the Government Hills drainage system. The project increased the pond’s capacity, wrought iron gates replaced chain-link fences, and new landscaping was introduced that included new trees, plants, a walking path and benches.

“We were able to take this vacant piece of land and build this beautiful facility, and we really appreciate the input of the community,” Balliew said. “This is the culmination of all that effort. Park ponds have a dual purpose of reducing the flood risk and improving quality of life. Each is developed in coordination with the City of El Paso Parks and Recreation Department.”

“El Paso needs park ponds as part of the essential stormwater infrastructure,” Tolbert noted. “It doesn’t rain often around here, but when it does, look out…at the same time, these ponds can serve a recreational role. In District 2, we certainly need access to more parks, and features such as park ponds help us to do just that. It’s already begun to have a positive impact on the neighborhood.”

Pollard Pond is one of four capital projects completed in the Central stormwater system. The pond can collect up to 740,000 gallons of storm water and convey most of it to the Pershing Dam, east of US-54.

The pond also diverts some water into the Government Hills Channel.

Parks and Recreation Opens Registration for After...