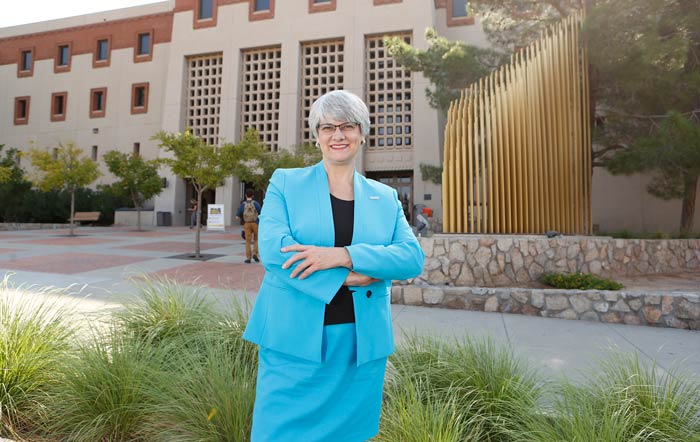 Carol Parker, J.D., The University of Texas at El Paso’s new provost and vice president for academic affairs, spent an idyllic childhood growing up on a dairy farm in rural Michigan.

She spent many of her early days reading books and taking care of a plethora of pets, including her very own pony.

As a young child, she was certain she would grow up to be a nun just like the strong, influential female figures who inspired her daily at Catholic school.

After graduating from high school, she attended community college as a first-generation college student. Her childhood interest in becoming a nun shifted to an interest in law.

Provost Parker worked full time while attending school, often having to sit out some semesters but always returning to pick up where she left off. She was never put off by hard work or navigating challenging situations, skills she developed from her early years helping her family run the farm and being the oldest of eight siblings.

After law school, Provost Parker worked as a research attorney for the Michigan Court of Appeals. She later returned to academia and became a law library director, law professor, associate dean, and then vice provost, all at the University of New Mexico (UNM).

Provost Parker said participating in the American Council on Education (ACE) Fellowship program was a pivotal point for her professionally, and her first introduction to UTEP.

The ACE Fellowship is a yearlong leadership development program for higher education administrators. The program included a mentorship placement with the provost at Arizona State University; special projects for the UNM President; cohort-based retreats, workshops, conferences and special projects; and visits to more than 30 colleges, universities, higher education systems, foundations, government agencies and nonprofit organizations throughout the U.S.

“We visited a lot of universities … including UTEP,” she recalled. “During that visit, I met President Natalicio and learned about the wonderful things UTEP was doing. I kept an eye on UTEP ever since.”

Provost Parker started her new role Sept. 1, 2017. She is responsible for the oversight and administration of all academic programs, ensuring that they prepare students for a broad range of postgraduate and career opportunities, and increased prosperity and quality of life for the surrounding region.

“I am looking forward to, first and foremost, contributing to the future success of our wonderful, hard-working UTEP students,” Provost Parker said. “Advancing the work of the new UTEP Edge program will be a big part of that. I am also looking forward to overseeing the expansion of doctoral programs and graduate enrollment. I think UTEP is setting the national standard for providing affordable access to a high-quality education, and I am excited to be a part of that.”

Provost Parker will work with deans, faculty and staff across the campus to continue developing and promoting UTEP’s nationally recognized model for enhancing the excellence of its academic and research programs, while successfully offering access and affordability to a first-generation and historically underserved student population.

“We are very pleased to welcome Carol Parker to UTEP,” said President Diana Natalicio. “Her leadership as a senior academic administrator at the University of New Mexico, together with her strong commitment to the role of public higher education in fostering social mobility, align extremely well with the academic leadership role she will play at UTEP. I look very much forward to working with her as we continue enhancing our academic and research programs and launching our newest student success initiative, the UTEP Edge, which focuses on developing students’ strengths and talents to ensure their competitiveness for postgraduate education and careers.”