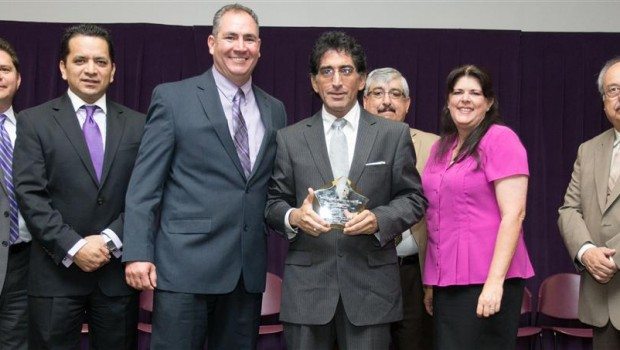 Ask anyone at Eastlake High School who at the school leads by example, and one name pops up, Joe Ramirez, a parent volunteer.

Ramirez, SISD’s 2014-2015 Secondary Volunteer of the Year, was recently selected as a Hero for Children by the Texas Board of Education, said Rachel Tarango, the district’s volunteer coordinator.

“It was a great surprise,” said Ramirez, who has been volunteering in schools for more than 12 years. “It was so unexpected.”

The state award recognizes individuals who volunteer time, effort and support to public schools and students. The board of education presents these awards annually in recognition of outstanding service and dedication, and for providing each Texas student with a meaningful, positive learning experience in school.

Ramirez will be honored along with 14 others at the Sept. 11 meeting of the State Board of Education. He will receive a certificate and resolution, according to a letter sent by Donna Bahorich, the board of education’s chair.

“This is a huge recognition,” Tarango said. “His name will forever be displayed in a plaque along with all past recipients at the William B. Travis Building at the State Capitol.”

No one who knows Ramirez is surprised at the accolades. People love how animated he is and how much he gets involved on a campus.

“He is a big advocate for our teachers and our kids,” said Gilbert Martinez, principal at Eastlake. “He is full of ideas and is an outstanding volunteer. He definitely is a motivator, who leads by example.”

Ramirez began volunteering when his son, Vincent, was attending parochial school, he said. So when his son, now a freshmen at UTEP, began to go to Eastlake, he followed.

“It’s been very rewarding,” Ramirez said. “I have always done it to set a good example for my son. I love that through many of our events we are giving a platform for kids to perform. That is everything to me. I love that they show what they can do.”

“This is wonderful for everyone,” Tarango said. “Joe deserves it.”

Even though his son is no longer at Eastlake, Ramirez continues volunteering.

“I am the treasurer,” he said. “So it’s not easy to step down. I still like helping the students. I will do whatever is needed.”