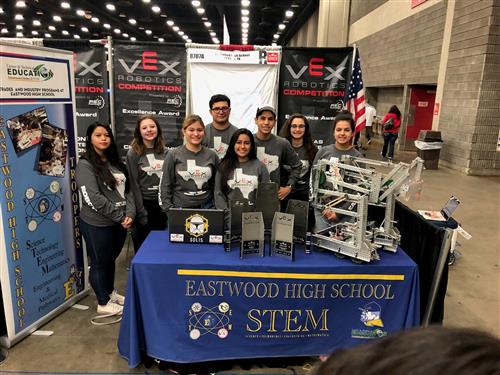 The Design Award is presented to a team that demonstrates the ability to implement the most effective and efficient robot design process. Their Engineering Notebook and discussion with the judges demonstrated the team’s ability to produce a quality robot with minimal adult assistance.

This team’s Engineering Notebook is a clear, complete, and organized documentation of the robot design process that demonstrates effective management of skills, time, and material resources. Students on this team were able to explain how they developed an effective game strategy and robot design.

This year’s VEX Worlds Robotics tournament was the largest robotics tournament, according to the Guinness World Records with over 30,000 people, including 1,648 teams from 30 nations participating.

The week-long celebration of STEM (Science, Technology, Engineering and Mathematics), diversity, and robotics kicked-off with the VEX Robotics Championships which crowned elementary, middle school, high school, and university champions from China, Canada, and the United States.