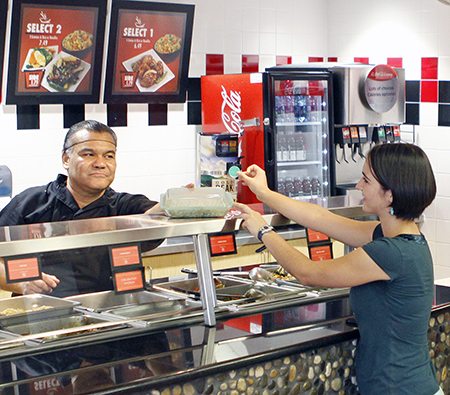 Students at The University of Texas at El Paso are now able to play a bigger role in saving the environment.

The student-driven Eco-Takeouts program is an effort to reduce and eventually eliminate the use of plastic foam at UTEP by replacing disposable takeout boxes with reusable containers at different eateries throughout campus.

UTEP’s Green Fund and Sodexo Food Services have teamed up with a registered student organization called the Student’s Green Team to develop the Eco-Takeouts program at the University. Fernanda Lugo, a junior biological sciences major and president of the Student’s Green Team, and James Holt, a senior mechanical engineering major and Green Team member, are leading the project to reduce UTEP’s carbon footprint.

“The Eco-Takeouts program, in the long run, is designed to eliminate the need for Styrofoam boxes and plates in all food locations,” Lugo said. “In similar programs at other institutions, it reportedly saved more than 30 billion Styrofoam boxes from going into landfills.”

The project team is looking for 300 people to participate in a one-year pilot program, which launched in late September.

Eco-Takeouts are microwaveable, leak resistant, dishwasher safe, reusable containers that will help reduce waste at the Bistro Grille, Burrito Gusto and Mein Bowl eateries at the UTEP Union and at El Sazon Minero and Pete’s Pizza in the El Paso Natural Gas Conference Center on campus.

“This sustainable food option will introduce a new idea of resource saving and environmental stewardship,” Holt said. “Plus, the boxes are just more convenient than Styrofoam because they’re leak resistant, microwavable, more sturdy and keep your food warmer.”

Participants in the Eco-Takeouts program will be issued a token, which will then be taken to a participating dining location on campus in exchange for an Eco-Takeout container. Once the participant is done with the container, they can exchange it for a new token and repeat the process.

“Getting the word out there is the best way to increase participation,” Holt said. “Even as we were taking pictures of the boxes, we had students walk up to us and ask what they were for and where they could get them. There are a lot of students interested in sustainability who just don’t know how they can make a difference.”

Students who want to participate will be charged a nonrefundable fee of $5 and will be asked to answer occasional surveys to measure how Eco-Takeouts are being used. Rewards will be available to some participants upon completion of the surveys.

“The Eco-Takeouts program will be a gateway for new sustainability proposals to be welcomed on the UTEP campus,” Lugo said. “It will save money and resources and decrease our carbon footprint, reducing trash.”

Lugo says they were inspired to start the program after seeing firsthand how it functioned at another university. UTEP joins more than 600 universities and corporations, including The University of Texas at Austin, Harvard University, the Massachusetts Institute of Technology, Duke University, Disney, Intel and Hewlett Packard that use the Eco-Takeouts system.

“UTEP getting on board to go green and save Styrofoam is a big step,” Lugo said. “We’ve had many occasions where we’ve walked around campus near the dining areas just to find trash cans stacked to the top with Styrofoam.”

The UTEP Green Fund is a major player in launching the program. The Green Fund helps the University’s sustainability initiative and the environment by investing in renewable energy such as solar panels, promoting environmental sustainability on campus and the community, providing educational opportunities such as student internships, increasing energy efficiency, and conserving water and other resources.

“Food services is one of the most significant sources of waste on the campus, so anything we can do to reduce waste from this source is significant,” said William Hargrove, Ph.D., director of the Center for Environmental Resource Management (CERM) at UTEP. “I think that students will use [the Eco-Takeouts containers] once they learn the value and the system for using them. This will help UTEP reduce its waste stream, a significant step in reaching our sustainability goals.”

The Student’s Green Team is a University organization empowering students to make a difference in the sustainability practices and policies on campus and in the El Paso region by promoting volunteering, outreach and education in an interdisciplinary approach to sustainability.

For more information on the Eco-Takeouts program, visit ecotakeouts.com. To participate in the pilot program, go to utep.edu/ecotakeouts.