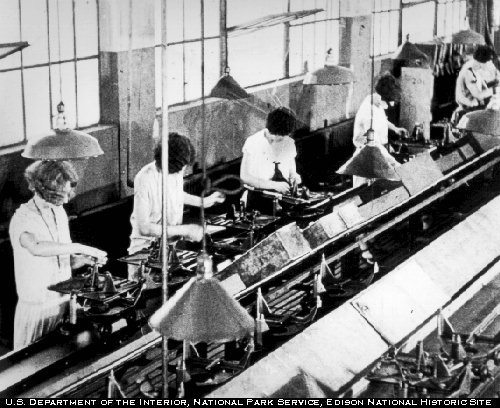 Among the many artifacts that the Industrial Revolution brought to the modern world (not withstanding smog and child labor) was the assembly line, that non-stop, non-thinking march of additive widgets that starts out as nothing at the entrance and by the time one gets to the exit, some completed product appears be it a car, a refrigerator, or a Dorito.

Indeed, most consumer products today are created on some form of assembly line. Walk into any Subway and your sandwich is created in assembly line fashion: Start with a bun, add some meat, add some cheese, some veggies, a condiment, and voila!

Your are holding a six inch turkey breast sub who’s very existence is a byproduct of Henry Ford and the second Industrial Revolution.

Public Education was among the many “products” that were created during the time of the industrial revolution. If you think about it, schools to this day have an “assembly line” like feel: a child comes in at Kindergarten or First Grade, and is essentially put on a conveyor belt of grades and courses until he or she is plopped out of the factory at graduation.

At each grade, more an more “widgets” are added until we believe that the “completed product” is ready for the world.

For decades that model was perfect for the society that we had created. Students in general, were taught to do things that would make them good assembly line workers because that was the main type of worker we needed. We needed workers that were perfectly happy adding widgets to the thing day after day until they retired.

Don’t ask questions, just keep the assembly line conveyor belt moving. Chances are, you had a great grand something-or-another that worked in a factory until they retired and were quite happy.

The US is no longer the human-facing industrial juggernaut it was during the late 19th and most of the 20th centuries. For better or worse, many of the jobs that once required a human worker have been replaced with robots or automatic kiosks.

Almost any job that requires repetitive motion or data entry is fair game for automation. Technology, along with the addition of Artificial Intelligence (AI) have greatly lessened the need for factory workers which was the driving force behind education for the last century.

Yet that original model of education, born during the Industrial Revolution to make factory workers, by-and-by, has pretty much stayed the same. Rows of students, listening to a teacher, doing rote memory work, and moving mouse-like through a maze of hallways when a bell rings is the model of the past, of an education era that no longer fits needs of the society nor our students.

The model must change because the jobs that the model prepares students for are no longer there. Nor, despite the wishes of some, are they ever coming back.

What can education do to meet the employment needs of the next half century or so? There are several things, some obvious, some not so obvious. Here are a few: The most obvious one of course is to stop creating an environment that trains kids to be workers for jobs that will not exist.

Anyone that right this minute is looking for a career in trucking had better learn how to PROGRAM an autonomous truck and not learn how to drive one.

Redesign the physical space of where we teach. Move students out of the factory-like row of chairs facing forward and create environments that provide students with the tools they need to learn.

Imagine a classroom that more closely resembles a Starbucks, or an Apple Store, where the students move the area that they need at that time, can work in groups or solo, while the teacher acts as not a wise font of all knowledge, but rather a coach, helping where needed. Then design a curriculum that works with that type of environment, instead of one where endless worksheets drill and kill any type of love for learning out of our students.

Make creativity just as important a topic as Science, History, Math or Reading. Teaching students to think about how to solve problems should be as important to educators as learning the multiplication tables or the differences between nouns and verbs.

Create curriculum that mimics the real world. The world is messy, more gray than black and white, and has much more problem solving opportunities than we currently teach kids about. Almost everything we do in life is a problem to be solved from what car to purchase, to what person to marry, to what burger to order at lunch.

Some problems we have solved long ago and we are on auto pilot when we revisit them, but each day provides us with new opportunities to solve new problems. Yet we still teach as if every problem has an A, B or C answer. Project and problem based learning provide students a pathway to become lifelong problem solvers.

How well we solve them and how well we teach our children to solve them will determine whether they are successful in the future or not.

Instill the value of lifelong learning. Students that just assume that they will learn new things during their lifetimes will have a great advantage over those that decide “real learning” stops at some artificial end point such as a high school or college graduation ceremony.

Unfortunately, there are a great many educators that hold that belief, that once they have received some degree or another that their learning has ended.

Create learning opportunities that are tailored to the students, instead of trying to have a student tailor themselves to the learning.

You would think that a doctor that only prescribes one kind of medicine no matter the patient’s illness would be a pretty poor doctor. Broken arm? Here, have some Penicillin. Yet, we still treat students in the US much like that.

There are of course, many other things we can do to create learning outcomes that will help students sail the ship of the future. Even these simple five examples are expensive and would require a substantial effort by both local and state education agencies to accomplish. Yet, if we can do just those things, we will go a long way towards helping students navigate the treacherous and unnavigated waters of the future work environment.

And we can finally get off the conveyor belt of Industrial Revolution education systems.

Op-Ed: How Dual Credit Courses could save...