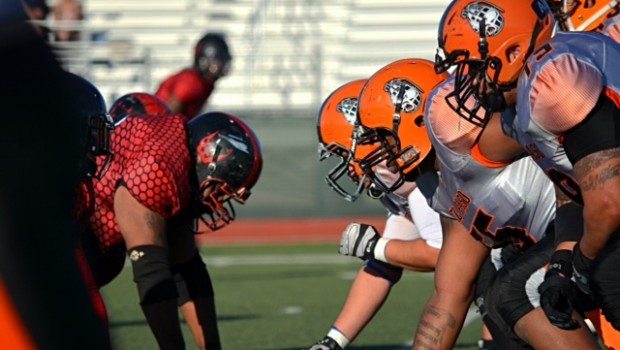 In 2016, the El Paso Armor didn’t have the kind of season they hoped for and finished 4-6 in the Rio Grande Football League. However, late in the season, some strides were made and they finished the year on a positive note.

“We struggled during the season last year, going through a quarterback carousel, due to injuries and what not,” Armor head coach Fonzie Gomez told Developmental Football USA. “I went ahead and got a quarterback out of retirement, his name is Ricky Najera. He played for me when we were the Raiders, he came back the last two games. We competed against the Desert Dawgs and lost in a shootout, then the last game of the season we beat the Sun Devils, who were a playoff team, so I know we’re going in the right direction.”

With several key players returning, the Armor could turn the corner this year.

“We got a good core of guys coming back, veterans, and we may have some more future acquisitions coming in with the Reapers closing shop,” Gomez said.

That’s been among the main topics of off-season chatter surrounding the Rio Grande Football League. Last season’s champion, the Sun City Reapers have closed doors, so the 2017 race is wide open.

“The pecking order, since we are losing the defending champions, it’s up for grabs in the division,” Gomez said. “It depends on who’s recruiting well and who’s done the best job in the offseason. I think anybody can win it. I think these teams are pretty good.”

The Armor are in the West Division, along with the Alamogordo Desert Dawgs, Las Cruces Kings, Borderland Warriors and the El Paso Sun Devils.

“I can say we’re going to be in contention,” Gomez said. “I think we can be number one. With the Reapers gone, I think we we have a bullseye on us, in our division. I look forward to what the new teams have.”

Last year, the West Texas Pride – now a member of the Minor Professional Football League – rolled through the East Division easily before losing to the Reapers in the championship game. This year, the RGFL is making some changes, in hopes of creating a tougher road to the title.

“In our league, we’ll have two cross-over games and everyone in our division plays each other twice,” Gomez said. “In the playoffs, their No. 1 will play our No. 4, our No. 1 will play their No. 4. That way there’s more crossover and it won’t be an easy road to the championship.

“For instance, lets take the Pride’s run last year. They had a cakewalk of a playoff run and it hurt them in the championship game.”

Gomez hopes Najera and company can lead the Armor to a successful 2017 campaign and a deep playoff run. With a solid backfield, the pieces are in place to make that a reality.

Offensively, running back Carmine Laviche was a workhorse for the Armor and Gomez plans to add more weapons to the backfield to take a little bit of weight off of his shoulders.

“Carmine should be in tip top shape coming back, hopefully injury free,” Gomez said. “He took a beating, but that’s the life of a running back. We do plan on giving him some help back there. That combo, to relieve some carries makes it a lot easier to endure a long season.”

A good running game starts up front, where several veterans return for the Armor.

Austin Monger is expected to have a big year among the wide receivers, a group which features several newcomers.

“Defensively, I think we were very tenacious last year, our defense kept us in a lot of ball games,” Gomez said. “If we did have a quarterback last year, we would have won a lot more games.

“Defensively, I think we’re just going to get better. Our front line should get better. A lot of key returners. I don’t think I’m going to lose any starters, but there are some spots being challenged, especially in the secondary at the defensive back positions.”

Look for more news on the Armor at DFUSA. Author: Landon Wright – dfusa.net