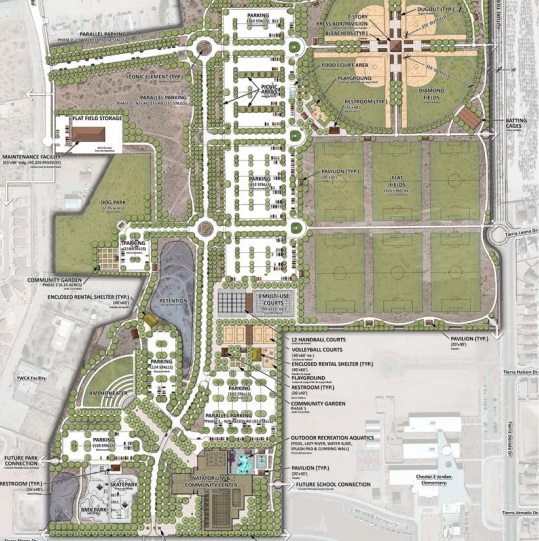 During Tuesday’s regular City Council meeting, members awarded a design contract for the first phase of what will be the biggest park in El Paso when constructed.

The contract for this initial phase of the 92-acre park will focus on the design of the buildings and associated infrastructure for the park which includes:

The approximate $2.9 million design contract for this phase was awarded to Perkins and Will/In* Situ. The design period for this phase is approximately 11 months, and will be conducted with community input from the public.

Development of the entire park will be conducted in phases, according to the Master Plan which was approved by City Council in June of 2015 in order to ensure that the park is developed in an orderly, efficient, and cost-effective manner.

The second phase of design will include the athletic fields and associated infrastructure for the park, and both phase one and two are funded by the 2012 Quality of Life Bonds.  The third phase of design includes the long-term vision for the park’s future, and would occur once resources are available.

When complete, the $48 million dollar Eastside Regional Park will be approximately twice as big as Eastwood (Album) Park, three times as big as Marty Robbins Park, and about four times as big as Yucca Park. It will be located on land near Montana Avenue and Hueco Club Road in far East El Paso, and is part of the City’s commitment to enhance El Paso’s quality of life through recreational, cultural and educational environments.