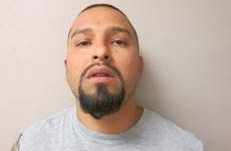 Detectives with the El Paso County Sheriff’s Office are asking for the community’s help in finding a wanted sex offender.

According to EPCSO officials,  a warrant for Jorge Luis Rodriguez was issued, as he has failed to report his whereabouts to officials. Rodriguez is a registered sex offender with the El Paso County Sheriff’s Office.

EPCSO officials say Rodriguez’s sex offense is for Aggravated Sexual Assault Child, the victim being a 13 year-old female at the time of the offense. Officials add that, “Several home compliance checks have been initiated at his registered address with negative results.”

Rodriguez is also wanted for Possession of a Controlled Substance, which carries a $100,000 bond.

Anyone with information on the location of Jorge Luis Rodriguez, is asked to call the El Paso County Sheriff’s Office at 915-538-2008.