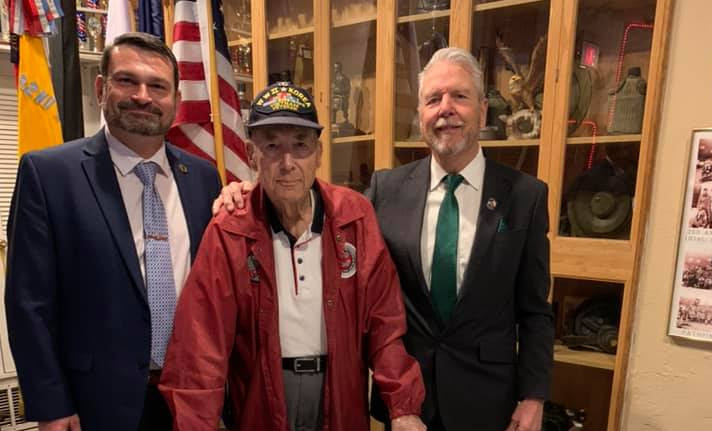 The El Paso community and the entire Nation mourns the loss of American hero, Lieutenant Colonel (Retired) Robert E. Chisolm who passed away peacefully in his home on January 4, 2021.

“Col. Chisolm was a remarkable man who fought in World War II, Korea and Vietnam,” said County Judge Samaniego. “He was wounded in all 3 wars, yet demonstrated exceptional courage as he continued to serve our great Nation. Our Country will forever be indebted to Col. Chisolm for the heroic sacrifices he made so that we can live in peace.”
Almost immediately following the Japanese attack on Pearl Harbor on December 7, 1941, Col. Chisolm’s two older brothers enlisted into the military to fight in World War II. After much persistence from their son, his parents finally agreed to sign the documents stating that their son, now known as Col. “Bob” Chisolm, was really 19 instead of 17, so that he too could serve his country.
In August of 1942, he officially joined the United States Army and attended basic combat training in Fort Walters, Texas, where he completed Airborne “Jump School”, and was assigned to the 508th Parachute Infantry Regiment of the 82nd Airborne Division.
Chisolm was involved in the combat action of Operation “Neptune”, completing a combat parachute jump into Normandy, France, on D-Day, suffering his first combat wound at age 19.
Col. Chisolm was also involved in the bitter fighting in Belgium during the “Battle of the Bulge”, and endured wounds of such severity that he almost lost his life. In 1953, Chisolm continued to serve his country and fought in the Korean War, where he sustained yet another wound which would lead to his evacuation to a U.S. Military Hospital in Japan.
Col. Chisolm demonstrated exceptional courage when he entered the Vietnam War, and served with the Vietnamese Army’s 45th Regiment and was subjected to additional combat service. The name Robert E. Chisolm is etched into the registers of military combat history as it appears as entry number 45 in a list of combat veterans who have earned the Triple Combat Infantry Badge, for service in three military conflicts which includes: World War II, Korea, and Vietnam.
In August of 2012, the French Government recognized Lt. Col. Chisolm for his part in the liberation of Paris, France, and awarded him with the French Legion of Honor Medal, and bestow upon him the status of Knighthood, 1st Degree.
Col. Chisolm had an exemplary military career and after his service continued to give back to the El Paso community. Please join us in honoring this amazing veteran.
For more information, Click Here   |   For our complete coverage, Click Here
Tags: Chisolm