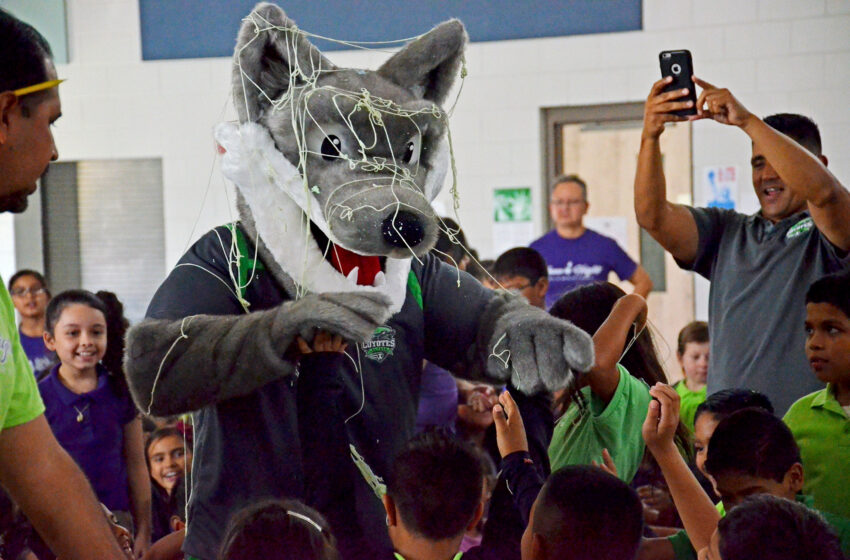 Normally when a coyote shows up at an elementary school, it’s quickly ‘shooshed’  away, but when that coyote is Max and he’s representing the city’s newest team, it’s a party.

The El Paso Coyotes had their first social event at Yucca Heights Elementary School in Chaparral (New Mexico); it was made even more special, as this was the school’s first ever Pep Rally.

Team President Gil Cantu and player Tito Moreira encouraged the kids to reach for their dreams. They also spoke about values, discipline and told the kids to never give up and to work hard in everything they do in life.

Tony Aleman, Owner of LAT studio was in attendance; as well as the Coyotes Dance Girls.

As the El Paso Coyotes mascot “MAX”  walked in, the kids excitedly ran to meet him for the first time. Max had several competitions for the students and presented soccer balls as prizes.

Owner Ricardo Caballero and Cantu were so grateful to Yucca Heights Elementary for inviting them to their new school, which they described as “beautiful.” They also thanked Principal Laura Pargas, Assistant principal Margarita Barraza and Counselor Mary Lou Chavez for all their support.