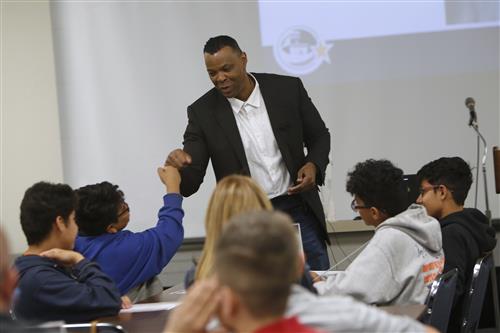 Boys from throughout EPISD put on their best duds and attended the Project MALES Middle School Leadership Summit on Friday in hopes of developing the qualities they’ll need to be successful in life.

Five students from each EPISD middle school were selected to participate in the daylong program that included sessions on leadership and character building.

“It’s important that we acknowledge that a lot of times we expect our young boys to be tough and be able to handle it, but they need mentoring just as much as anyone else,” Superintendent Juan Cabrera said in a taped welcoming video. “Everyone needs a mentor and a guide growing up to take the right path.”

Cabrera told the boys that just like them, he faced many obstacles during his childhood, but that through mentorship he was able to graduate high school and earn college degrees.

“I grew up in a single parent household. So, for me, having mentors was important and a lot of those for me were coaches,” he said. “They looked out for me and helped me as they were coaching me in sports but also outside of sports. That led me to become a mentor myself through Big Brothers, Big Sisters after college.”

Despite the responsibility of being the oldest of his siblings, Cabrera learned to overcome and was the first in his family to attend law school.

“That was something that was important to me,” he said. “School was tough for me but having mentors on the academic side helped me focus on the importance of school work. Try to find someone you respect and look up to. Sometimes our peers don’t have the experience and the wisdom to help guide you through life so it’s important you find someone that can do that for you.”

The keynote speaker for the day was Vince Sheffield, EPISD’s deputy superintendent of administration. He spoke about Martin Luther King Jr.’s message of not judging a man by his appearance but rather by the content of his character.

He also outlined positive qualities for the students to follow, such as humility, compassion and trustworthiness.

“Your inner self is up to you and how you build it,” Sheffield said.

After the speaker, students were divided into groups with peers from other schools to attend five different breakout sessions. Each session

One session asked students to build a balloon tower, but each group was given a set of education presets. One group represented high school drop outs, so they had to build the tower without speaking and with one hand behind their back.

Terrace Hills eighth-grader Keanu Yoshida and his team didn’t let that stop them from trying, and although they came up with creative ways to blow up and seal the balloons, they could not compete with the other teams.

“It made me salty not being accomplish what we needed to do,” he said. “It was difficult, but we did our best.”

Seventh-grader Cesar Servantes’ group represented students who graduated from high school. His team could use their hands but not speak to each other.

“It put a different perspective on education,” he said. “It showed me the more education you have the easier life can be.”

The Bassett middle-schooler was recommended to join the program because of his grades.

“You can see how they become more confident being part of this program,” he said. “Even just coming here today and having another opportunity to learn.”