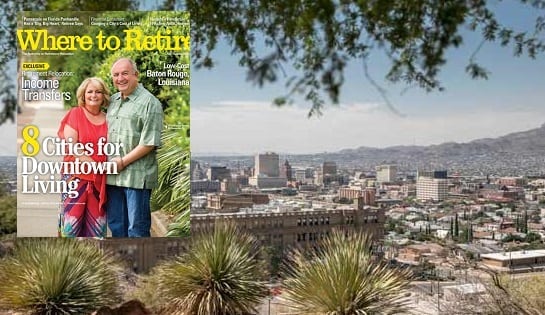 El Paso has been selected a top retirement destination by Where to Retire, the only magazine in America geared toward helping people with retirement relocation decisions.

El Paso is profiled in a feature titled “8 Cities for Downtown Living” in the July/August 2018 issue, available nationwide on June 12.

According to Annette Fuller, Editor of Where to Retire Magazine, many retirees like to carve out a niche for themselves in a larger city’s lively, walkable downtown.

“Retirees often look for locales that provide easy access to dining, shopping and entertainment, and downtown districts often afford these and more within a confined area. The popularity of these cultural cores is sparking revitalizations across the country, but El Paso’s officials began revamping the downtown area more than a decade ago,” Fuller said.

“The renovation is evident in the conversion of the historic Blue Flame building into housing, bringing in the Triple-A El Paso Chihuahuas baseball team and redoing the city’s center, the San Jacinto Plaza. One retiree told our writer, ‘The cost of living, specifically housing, makes it the most affordable small big town in Texas.’”

The article sites research that,  “700,000 Americans relocate to new towns to retire. Generally, relocating retirees are healthier, better educated and more affluent than those who choose to not relocate. They bring significant economic benefits to their new states and hometowns. Nationally, two dozen states and hundreds of towns seek to attract retirees as a source of economic development.”