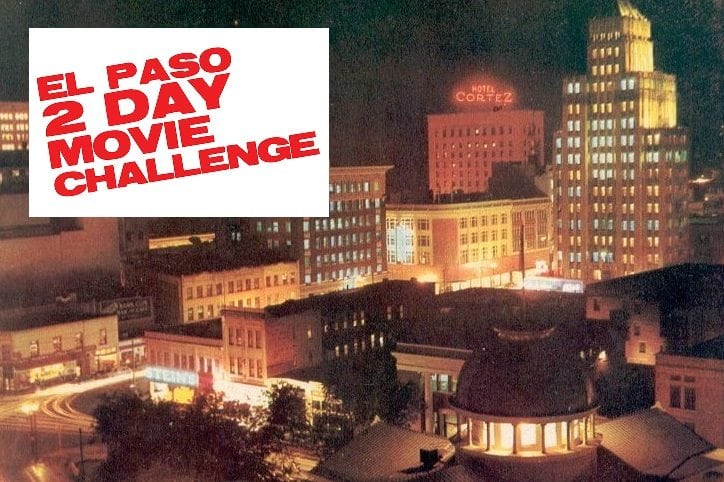 The El Paso Film Commission announced this week that they will be coordinating a two-day weekend movie-making event, The El Paso 2 Day Movie Challenge, with an awards presentation and screening on June 15th, 2018 at the Plaza Theatre, downtown El Paso.

The weekend movie event is like other timed competitions that have grown in popularity in the last decade, such as 24 and 48-hour events, where movie makers put together a “team” of actors and crew to create a short movie over the course of a two-day weekend.

Officials say that teams will register to participate and arrive at a kick-off event the night of Friday, June 8th, to receive instructions and elements to include in their movies.  Teams may not prepare any part of the movie ahead of time.

Each team must draw a movie category or “genre” from a hat at the Friday night event.

“Teams will draw for categories like DRAMA, COMEDY, ACTION, or FILM NOIR,” notes El Paso Film Commission Coordinator Drew Mayer-Oakes, who has organized similar events in San Antonio.  “It’s really a challenge to walk into the Friday evening event, with only your crew, actors, and perhaps some locations in mind – then draw a movie category and write, shoot and edit your 4-8 minute movie in two days.”

All movies are due by Sunday at 7:00 PM.  Teams may register by clicking this link.

Additionally, the El Paso Parks and Recreation Department is partnering with the El Paso Film Commission and allowing movie teams to shoot in city parks without the usual reservations and fees.  “We want our local production community to learn the proper procedures for shooting projects in the city,” says Susie Gaines, director of the El Paso Film Commission. “And with the Parks Departments participation, we hope some of the short movies will include scenes from our area’s beautiful parks.”

Certain parks may not be available during the weekend event, but that’s just another part of the challenge of shooting a movie in a thriving, busy city like El Paso.

There is no entry fee to enter a team in the Challenge, but Team Leaders must be 21 years of age or older.  Professionals and non-professionals alike can participate.

There is no limit to the size of a team, but an important part of the challenge is for all teams to maintain proper likeness releases and waivers for all cast, crew, music and locations in the movie, just like a professional production.

The El Paso Film Commission, a division of Destination El Paso, is the official film office for the City of El Paso and the surrounding Borderland.