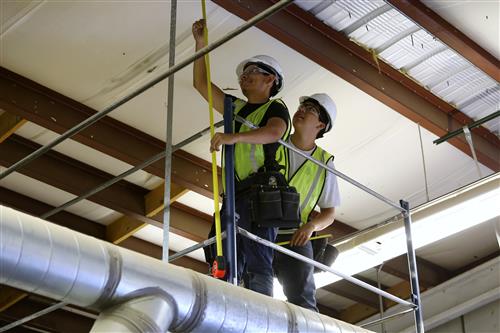 Students in EPISD’s electrical skills program traded their summer sunglasses for safety goggles during their break to hone their craft and earn a little cash along the way.

Eight student workers from the CCTE electrical skills program spent up to 20 hours a week this summer putting into practice what they learned in the classroom during the school year.

The group of interns traveled to other schools, under the guidance of teacher Victor Ramirez, to fulfill much needed electrical projects throughout EPISD.

“They take a lot of pride in the work they are doing,” Ramirez said. “They can go back and say that ‘I worked at that school and I did this certain room or project.’”

Austin High senior Claudia Whitedog wants to teach music when she graduates from college but knows the value of the skills she’s developing at CCTE – especially installing lighting and switches.

“I spent a week trying to figure it out and then when I finally got to turn on the light switches and they lit up, I was like, ‘that’s awesome.’”

Whitedog joined the program to have a summer job to further develop her electrical skills.

“I know what I’m doing,” she said. “I’d rather do this than running around at a restaurant trying to seat people or cook something or stock shelves. I like that there is something new to do here every day.”

Pablo Ordoñez enjoyed learning about electrical technology and the job opportunity it gave him after graduating from Coronado High School this spring.

“It makes you feel good because you’re making your school better and then you can look back and say, oh, ‘I did that.’ I had a good experience,” he said, under the newly installed LED lights. “CCTE is an amazing school. You can learn anything you want to learn here and you get a lot of great experience.”

While Whitedog and Ordoñez don’t plan to become electricians after college, Ramirez touts the value of the opportunities available at CCTE. The electrical technology teacher was introduced to his trade as a CCTE student in the 1970s, worked in the industry after graduation and then returned to the campus to teach future generations of electricians.

“I have a lot of students who have learned to sheet rock and paint and tile along with electrical work so when they get graduate and own their homes, they usually don’t have to pay anybody to do it because they learned how to do it here,” Ramirez said. “It saves them a lot of money in the long run and they can learn how to build things and then they can apply it to whatever they want to do.”

These industry certifications available at CCTE can translate into careers immediately after graduation.

“You can get out of high school and go right into the industry,” Ramirez said. “Take cosmetology for example. A lot of the students here, they’ll be able to go into the salons right away once they passed their license and a lot of them put themselves through college that way.”