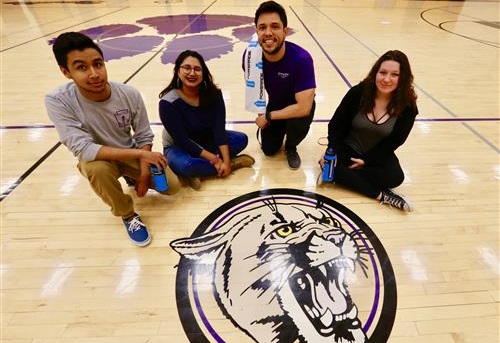 Three EPISD high schools will get a boost in their athletic facilities thanks to their participation in a video contest by Powerade.

Franklin and Austin high schools each won regional grand prizes in the “Power Your School” contest from Powerade, earning them $10,000 toward improvements to the athletic equipment at their campuses.

Additionally, Bowie High School earned $2,000 for their participation.  A total of $100,000 were awarded throughout the region.

“We wanted to show some the need for new weight room equipment and we also wanted to the wide range of diversity in our school and how so many athletes use the weight room,” Franklin’s student activities manager Angel Santa Cruz said. “We also wanted to be creative with our transitions, making sure we included every type of sport.”

Three students worked collaboratively with Santa Cruz, teacher Jose Bueno and football coach Frank Martinez to create the concept for the video, direct it, film it and edit the final product.

Senior Georgett Hernandez spent her time behind the video camera documenting footage of each sport captured in the video.

“It’s so cool to take part of something that will benefit the school for years to come,” she said.