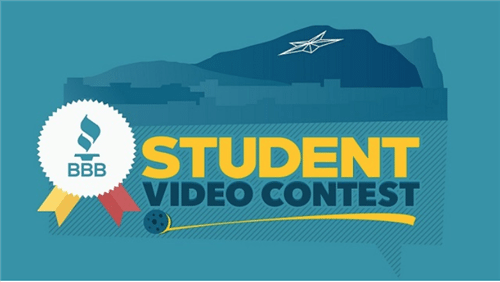 Two EPISD teams received top honors in a video competition that asked students to share with the public how best to identify business of reputable background in order to avoid consumer fraud.

Teams from the Center for Career and Technology Education and Bowie High School placed first and second in the Better Business Bureau Paso Del Norte’s Student Video Contest. A third EPISD school, Irvin High School, made the list of finalists in the contest.

“The videos submitted far exceeded our expectations as to what the community could do for us,” said Marybeth Stevens, the bureau’s president and CEO. “We were incredibly impressed with the students and their videos.”

Students were asked to create at 60-second video on the theme of “Shop Smart. Look for the Seal.”

Contestants were judged on the creativity and quality of their videos along with a pitch to BBB’s panel of judges. Videos will be used nationwide by the organization to show its members what can happen when engaged with the younger generation.

Cordero’s video used animation to warn shoppers about “crabby” and “slimy” businesses that aren’t trusted by the organization. Garcia’s video used humor show what the BBB can do for the public.

Winning teams will be recognized by the BBB at  the 2018 BBB Annual Meeting and Torch Awards luncheon. Teams will be awarded with up to $1000 for their school’s video production organizations, and individual students will receive gift cards up to $150.

“We are excited for our competition next year, and expect it to be bigger and better,” Stevens said.