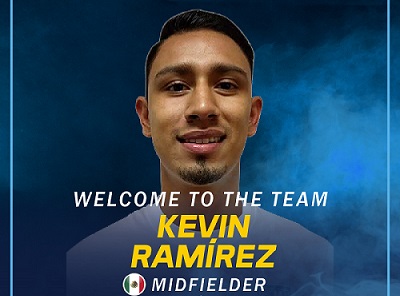 Ramirez moved up the ranks in the Guadalajara youth program, most notably with the U15s and U20s and made his professional debut with Chivas in August of 2018 against Cruz Azul.

The 20-year-old Ramirez also attended trials with English Premier League powerhouse, Manchester City when he was 15. His experience at such a young age speaks volumes to the caliber of players head coach, Mark Lowry is acquiring for EP Locomotive.

“When the opportunity presented itself to bring Ramirez to El Paso, it was a very simple decision. He is very versatile, he can play 3-4 positions within the team. He is a very intelligent player, composed and incredibly mature player for someone so young,” said Lowry.

“Developed and currently contracted at Chivas, one of the most prestigious clubs in the continent, shows how well regarded he is as a player,” Lowry said on Ramirez’s prowess.

“For us to work with Chivas and bring Ramirez here for 2019 will be great for all parties involved. I am excited to see Kevin develop with us and compete daily to make our team stronger,” said Lowry.

EP Locomotive FC has ten players on the roster and includes international athletes from Argentina, Belgium, Mexico, Scotland, and Spain with more signings to be officially announced in the coming weeks. Training camp will kick off in mid-January.