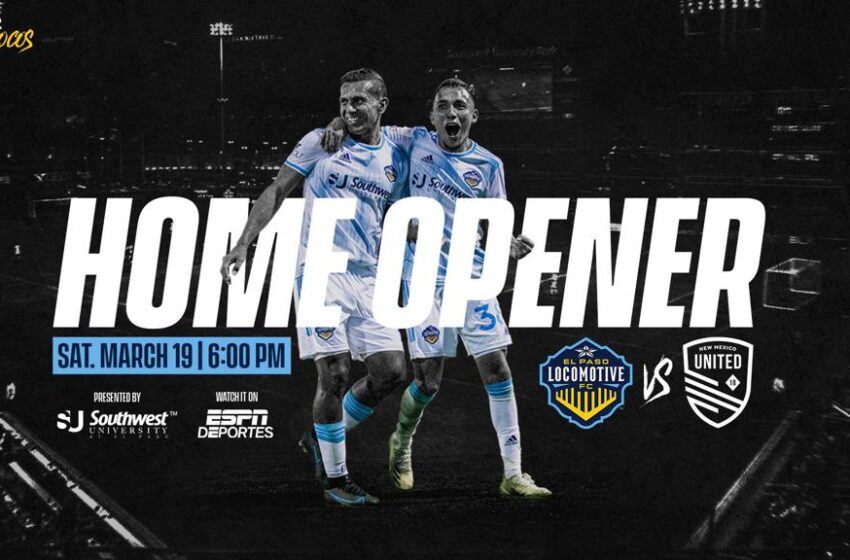 The United Soccer League today announced its 2022 USL on ESPN national telecast schedule, with El Paso Locomotive FC being predominately featured in four of the 19-match slate on ESPN, ESPN2, and ESPN Deportes.

“For Locomotive to be featured nationally in four games is unprecedented for the club,” said General Manager, Business Operations Andrew Forrest. “Our national exposure and footprint is expanding yearly.  This is a testament to the city and the fans as the USL and ESPN are seeing El Paso Locomotive as a national player in the soccer landscape.  We cannot wait to showcase this year’s team in our home opener, against our fiercest rivals, with a new Head Coach, all on ESPN Deportes.  Our fans won’t want to miss that match!”

El Paso Locomotive will first be featured on ESPN Deportes when the Sun City club renews its storied rivalry against New Mexico United for its home opener on March 19 at Southwest University Park. Locomotive will again be featured on ESPN Deportes when, for the first time in club history, it travels to Torero Stadium to take on San Diego Loyal SC.

All El Paso Locomotive FC matches will also air on ESPN+ with the exception of Locomotive’s ESPN2 match against Detroit City FC. See below for the full 2022 USL on ESPN National Television Schedule

El Paso Locomotive FC kicks off its fourth USL Championship season against Sacramento Republic on the road on March 12 in a match that will be broadcast live on ESPN+. The Locos return to Southwest University Park for its 2022 Home Opener on March 19 against New Mexico United. Kickoff is set for 6:00 p.m. MT live on ESPN Deportes. Individual Game Tickets for the Home Opener as well as the rest of the 2022 USL Championship season will be made available for purchase on Friday, January 28 for the general public starting at 10:00 a.m. MT online by clicking here, or by calling 915-235-GOAL.