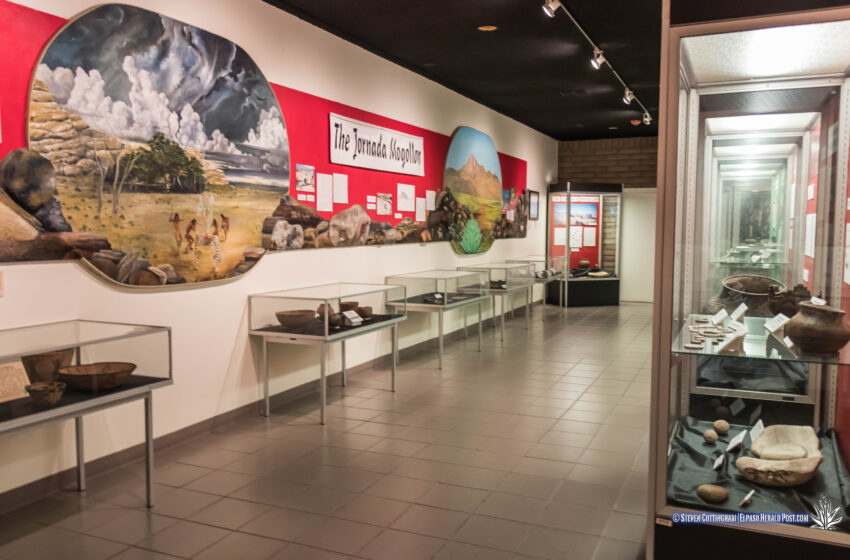 I’ve always had an interest in history; and  El Paso, Juarez and Las Cruces has some of the most interesting history I’ve ever learned.

There have been people living in this area for a very long time. In Huceo Tanks the history of people living out here goes back thousands of years. It is a long and storied history, the story of El Paso.

The El Paso Museum of Archaeology has been working, since 1976, to tell the story of our area. Dioramas, pottery, as well as classes, talks, and hands on events are used to tell that story.

When I was younger, and had just received my driver’s license, the Museum of Archaeology was one of my favorite places to go.

I would spend part of my day just walking through the displays, then the afternoon hiking in the surrounding mountains, wondering what it was like to live one-hundred, one-thousand, or even eons ago. Those trips were the basis for quite a few of my poems and stories.

“Originally,” Jeff Romney, the director of the museum share with me, “this location was somewhat isolated.”

It was, for the longest time, the only thing there on Transmountain was the museum. The sounding areas, below the freeway, were mostly vacant. Even the grounds, when I was younger, reflected the area: a parking lot, and not much else.

Today, the Museum of Archaeology is not just indoors. They now have programs that take one outside the building to learn, and gain some hands-on experience.

“We offer an opportunity to come out,” said Jeff. “Experience, and learn about 14,000 years of pre-history to modern day Pueblo culture”

First, the Museum has a collection of over 4,500 objects. “These,” says Jeff Romney, “come from various cultures and time periods.”

The bulk of the Museum’s collection comes from the Casas Grandes culture. You will also find items from the western cost of Mexico, the Tarahumara Indians, and others.

“We have our wildness park component,” Jeff said. “We have 15 acers of trails where you can learn about 200 species of native plants.”

You’ll learn about the plants and how they were used by ancient cultures: medicine, food, clothing. These plans had many uses to those peoples.

“We have archery events,” said Jeff. “You can come out and shoot a bow and arrow, which is an ancient technology still used today.” Each Saturday you can go out and experience how ancient cultures would hunt, and defend themselves through archery.

According to Jeff Romney the Museum will also be incorporating art into the telling of the history. “These people didn’t disappear,” he says. “In most cases they are still with us. Part of telling the story is working with our Native American Communities.”

The Museum will be bringing in Native artists, like Socorro Linden who is a Tarahumara Indian. Socorro’s works will be shown as a juxtaposition of old, and modern interpretations of their cultures art.

The Museum has activities for everyone, regardless of age. In fact, this October marks their fortieth anniversary, so there is much planed!

“Come and learn about El Paso’s pre-history,” continued Jeff. “Come and learn about our Native American Communities, both those who are still with us and who lived here in the past. It’s an important part of our history, and we are here to tell it.” There is so much coming up.

If you want to learn more, you can visit the museum’s webpage or facebook page.