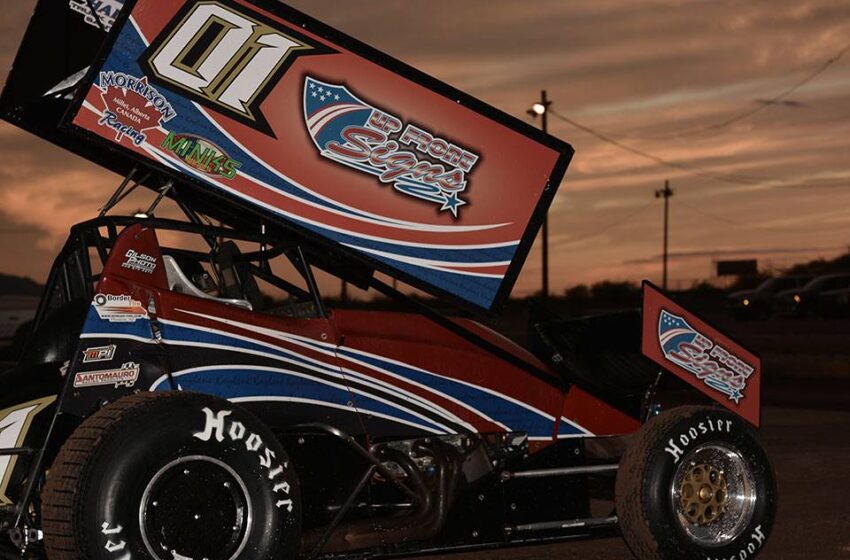 John Carney II is set to close out the 2018 season on a strong note by taking in this weekend’s $5,000-to-win ASCS Southwest “Copper Classic” at San Tan Valley’s Arizona Speedway.

The El Paso native is taking the wheel of the No. 01 entry fielded by Allan and Kaylene Verville for the event that takes place on Friday and Saturday.

“We had talked about doing something and this seemed like a good time to do it,” Carney explains. “They always have good equipment, so I’m looking forward to it and hope for a good weekend.”

It will just be the second time for Carney to take to the Arizona Speedway clay oval after posting a runner-up finish in the 2016 edition of the “Copper Classic”.

“I have just been there that one time and we were pretty decent both nights,” Carney comments.

It will mark Carney’s first action since rallying from deep in the field to post a sixth-place finish aboard his No. J2 racing entry at the season-ending Lucas Oil ASCS National Tour event at Sapulpa, Oklahoma’s Creek County Speedway on October 27.

“It ended up being a good night, considering that I got myself behind the eight ball early on,” Carney recalls. “I was too tight in the heat race and started in the back, then got by a few cars in the qualifier before a couple of others went by and I knew how far off I was.”

It came down to “B” Main action and Carney turned his night around.

“I just threw something at it and that thing came to life,” Carney says.

Carney climbed from fifth to second in “B” Main action to earn the 20th starting position for the “Fall Fling” main event. Carney was on the march throughout the 41-lapper, climbing from ten rows deep to capture a sixth-place finish by the time the checkered flag flew.

“If we had started the night with what we had in the ‘B’ and then the ‘A’, I feel like we would been on the podium,” Carney sums up.

Carney looks to finish strong with Allan and Kaylene Verville at Arizona Speedway on Friday and Saturday.