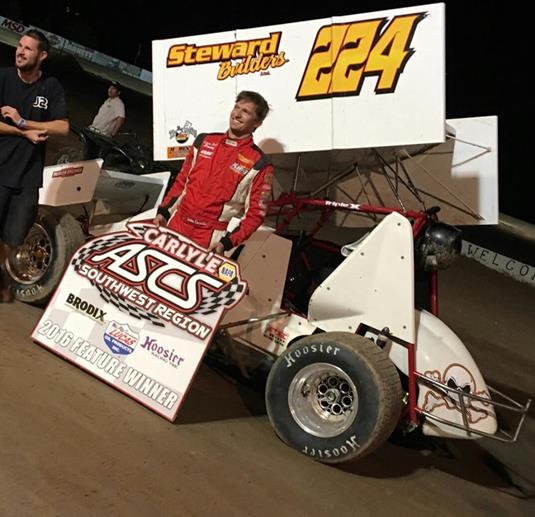 Taking the Steward Builders No. 224 to the southwest this past weekend, John Carney II took on the Carlyle Tools ASCS Southwest Region at the Western Tech Speedway Park in El Paso, Texas and the Southern New Mexico Speedway in Las Cruces, N.M. with double podium weekend that included Carney’s 11th win of the season.

Starting off at the Western Tech Speedway in El Paso on Friday, July 29, the native son came from ninth to win at the three-eighths mile oval.

“The track was heavy in El Paso, so we freed the car up for the main but it was still too tight. We started ninth and just picked our way through there,” commented Carney. Finding Colton Hardy leading, Carney completed the pass only to see the caution wave. On the restart however, John was determined to get out front.

“I pretty much decided I was going where ever the guy in front of me didn’t. He peeled off low, so I went high, and that gave me some momentum going down the back straight-a-way and away we went.”

For Carney, the win was a very personal one as the track is slated to close at the end of the 2016 season, “That is more than likely the last race I’ll ever run at El Paso, so it was good to get a win. It was also where I ran my first 360cid Winged Sprint Car race; my first race at all really, so it was great to close the track on a high note.”

“We got side by side several times running second and third. I was determined the run the bottom, and as usual, Lorne was set on running the top so it was a typical battle between me and him. We’ve certainly had plenty of those,” chuckled Carney.

“Ziehl was kind of running away at first before we finally started running him down. I actually ran both of them down on the bottom, but they started throwing slime into the groove so I kept pushing in one a two and it just started playing havoc with me so Loren was able to get Ziehl, and within a few laps, I got him,” explained Carney of the chase. “

“After that, I got close to Lorne a couple times but every time we’d come up on lapped cars, I was forced to use that low line again in one and two more times than I wanted and it just kept messing with me. I finally did have a run on him, and I knew it was going to be tight, but I cleared him. I know I cleared him, but rather than slow up and turn down the track, and just rear ended me, and that turned me over the cushion and pointed me off the track momentarily so by the time I gathered it back up, I think we only had two to go, it was too late. We ended up my right front was at his left rear at the finish.”

Up next for Carney is the 26th Arnold Motor Supply 360 Knoxville Nationals presented by Great Southern Bank. John will be behind the wheel of the Scott Brown owned No. 11x.

“I have to thank Scott for the opportunity to get behind the wheel. I’m looking forward to seeing what we can do at Knoxville.”

For continued updates on John Carney II and the John James Racing No. 4j, fans can follow along on Facebook at https://www.facebook.com/profile.php?id=570728686284547&fref=ts.