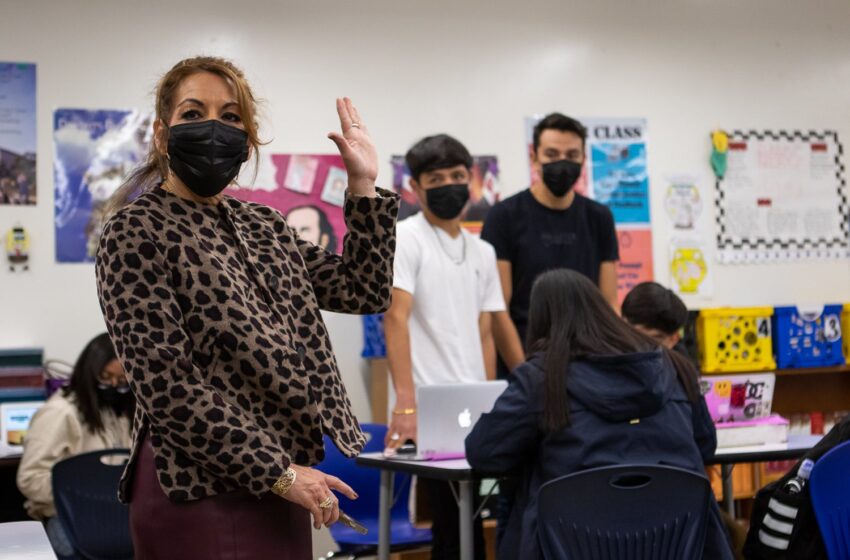 EPISD Superintendent Diana Sayavedra visits a freshman classroom at Bowie High School on Jan. 4. Sayavedra asked students for their input on desirable qualities in teachers and invited them to ask her questions in both English and Spanish. (Corrie Boudreaux/El Paso Matters)

The El Paso Independent School District reported 806 employee absences — nearly 10% of total staff — on Jan. 4, the first day of classes after winter break. Of those, 338 were teachers, a higher number than usual, said spokesperson Gustavo Reveles. EPISD has a total of 8,300 employees.

Though the rise in teachers out sick has created staffing challenges — during a school year when substitutes were already hard to come by — EPISD is not at risk of needing to cancel classes due to staff shortages, Reveles said. A handful of rural North Texas districts are canceling classes for this reason, as is Marfa ISD in West Texas.

“We’ve asked parents to be patient as we cope with it,” Reveles said. “We’re being creative in filling in the gaps.”

El Paso’s largest district is deploying central office employees with teacher certifications to classrooms and has combined some classes, he said.

Still, the situation is not ideal.

“Me and my classmates don’t learn as much as when we’re actually with our teacher, and it’s definitely more disruptive because a lot of people think that they can just play around when there’s a substitute,” Ingram said. “Our teacher has a better way of teaching than a lot of the subs do.”

And the disruptions haven’t been limited to the classroom. Ingram’s regular bus route was combined with another route due to a driver shortage, which has resulted in the sixth-grader getting home from school 40 minutes later than usual.

El Paso’s other large districts are also struggling with roughly 10% of staff out sick. Socorro ISD had 784 staff absences out of a total of 7,113 employees on Jan. 5, the first day of classes. That same day, Ysleta ISD had 776 staff absent out of 6,825 full-time employees.

The three districts provided little to no employee absence figures for this week or from the fall as a comparison, but all said current numbers of staff out sick are higher than usual. SISD and YISD did not make someone available for an interview.

Closing a school is an absolute last resort, Reveles said.

“We strongly believe that schools remain among the safest place for students,” he said. “Our superintendent (Diana Sayavedra) has been very vocal in her belief that schools provide not just educational services to families, but also nutritional, emotional and many other social services. Closing a school can have a very negative impact on the community.”

Texas districts cannot temporarily move all students to remote instruction, an option available to them at the outset of the pandemic. The Texas Legislature only approved remote learning for up to 10% of a district’s students, and districts must remain open for in-person instruction to receive full state funding.

Texas Gov. Greg Abbott has issued executive orders prohibiting districts from requiring staff and students to wear masks or be vaccinated. Some districts have ignored his mask mandate ban, but El Paso area districts are only “highly encouraging” their students, teachers and staff to wear masks on campus.

Ingram, who wears a mask in school, estimated that a quarter to half of his Morehead classmates do the same. “Lots of people still don’t wear masks, even the people who have already caught COVID before,” he said of the West El Paso middle school campus.

EPISD has seen a drop in its student attendance rate since classes resumed this month. A good attendance rate is typically in the mid-90s, Reveles said. On the first day back, it was 87%.

Districts are pushing for students to get vaccinated and have organized on-campus vaccination clinics at their schools.

The COVID-19 vaccine has been available for children age 5 and older since early November. The city of El Paso and area pharmacies are now administering the vaccine booster to 12- to 15-year-olds following Centers for Disease Control and Prevention approval last week.

“Immunization is one of the most important things parents can do to protect their children’s health,” said Dr. Hector Ocaranza, El Paso’s health authority and a pediatrician.

Just 26% of El Paso County children ages 5 to 11 are fully vaccinated, meaning they’ve received two doses of the vaccine, according to state data.

Full vaccination plus a booster shot provides strong protection against infection from the omicron variant. Though vaccinated individuals can still become infected, the vaccine greatly reduces the chance of severe illness.

In an effort to reduce on-campus transmission, districts are urging staff and students to stay home if feeling sick or exhibiting potential symptoms.

“We’ve got to make sure that we’re not creating unsafe environments in school,” Reveles said. “So keeping your child at home if they’re feeling sick is a priority for us.”

Smith has been a reporter for the El Paso Times and The (McAllen) Monitor. She’s covered education, criminal justice and local government. A Seattle native, she’s lived in Texas since 2014, with stops in Austin, the Rio Grande Valley and now El Paso. She can be reached at mksmith@elpasomatters.org or 915-247-8857.